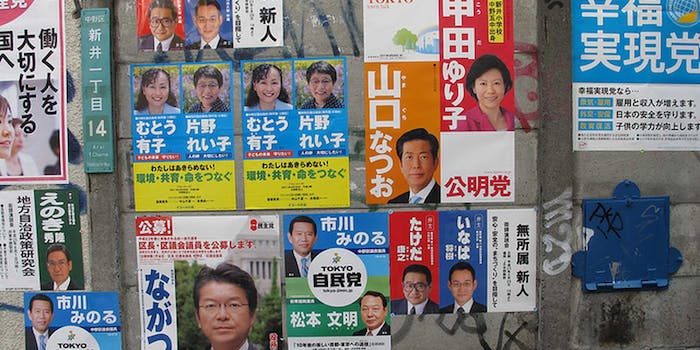 Japan has finally revoked its ban on online political campaigning, and many politicians are just learning the ropes.

Given Japan’s reputation as a technological pioneer, it’s probably hard to imagine that its political campaigns look a lot more like 1913 than 2013.

But that’s how it’s always been in Japan. Thanks to the strict interpretation of pre-Internet campaign laws, Japanese politicians have continued to rely on leaflets, posters and—when all else fails—cars driving around blaring candidates’ names.

Everything’s changed this year, though. A new law has allowed Japanese politicians the ability to campaign online for the first time (albeit in a more limited capacity than their U.S. counterparts). Now, lawmakers are getting a crash course in how to win votes with social media and email. And so far, the results have been less than perfect.

That’s how long Takagaki thinks it will take social media to begin effecting Japanese elections, which, in many ways, look like a time capsule into a pre-Internet version of American campaigns.

The reason Japan is so far behind is due to the interpretation of campaign laws about the printing of campaign leaflets and posters. These rules were adopted shortly after World War II to limit the number of campaign materials a candidate could print, so as to keep wealthier electoral contenders from reaping an unfair advantage. Once the Internet came into existence, though, the law was interpreted to mean that candidates were forbidden from any campaigning online.

But advocates for online campaigning say this old-school model has limited the Japanese electorate’s ability to substantially learn about a candidate’s platform. Instead of being directed to policy-rich websites via campaign emails, most candidates have had to rely on hand-shaking and stump speeches to get their message out.

As a result, elderly voters have continued to dominate the electorate, according to Takagaki, while Japanese youth remain politically disengaged.

This past weekend’s upper house elections where the first time any Japanese politicians have been able to campaign online. The results were mixed, according to experts, without the existing political social media expertise already in place. And online campaign activities were limited to candidates and political parties. Political advocacy groups and private supporters still can’t bombard voters’ inboxes the same way they can in the United States.

As the Post describes it, many novice candidates struggled to figure out what to do online. Many were only able to amass a few hundred Twitter followers, while others used Facebook simply to post foodie photos of their lunches. In many cases, their social media feeds “amount(ed) to little more than schedules and diaries of what they did.”

There were some notable exceptions. Japan’s Ronald Reagan, a movie star turned politician named Taro Yamamoto, was able to amass 200,000 followers, who he encouraged to photograph and Tweet his campaign events.

These new campaign tactics do not seem to have made much of a dent though, running against a strong cultural aversion to new media politicking. The Ministry of Internal Affairs, which runs Japanese elections, reported the lowest voter turnout since 1995. Just 52.61 percent of voters took part in this past Sunday’s election, which is down 5 percent from the previous upper house elections in 2010.

According to exit polls, only 10 percent of voters took into account candidates’ Internet campaign information in making their decision. On the flipside, 86.1 percent definitively said they did not factor online campaigning into their decision.

Japan’s lackluster enthusiasm for online campaigning was backed-up in pre-election polls that found 75 percent of the voting public did not use the Internet to access campaign information. This, despite a nearly 80 percent Internet penetration rate among the Japanese populace. As could be expected, online campaigning became more unpopular the older the survey responders were. But even among voters in their 20s, only 40 percent used online voter resources.