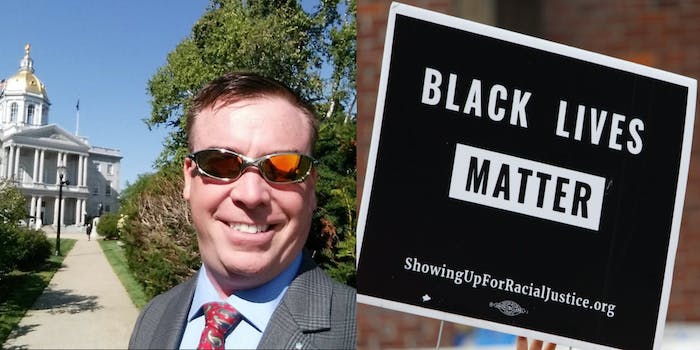 New Hampshire State Rep. James Spillane is under investigation after advocating for the burning and looting of houses that show support for the Black Lives Matter movement.

The New Hampshire Department of Justice is investigating the Republican for his since-deleted Facebook post to see if he violated the New Hampshire Civil Rights Act. “Public Service Announcement: If you see a BLM sign on a lawn, it’s the same as having a porch light on at Halloween. You are free to burn and loot that house,” Spillane reportedly wrote in a recent post.

According to the Concord Monitor, the Department of Justice’s Civil Rights Unit received multiple complaints regarding the Facebook post, with some pro-Black Lives Matter locals expressing fear that it will make them “targets of violence.”

Spillane is also facing calls to resign. New Hampshire House Speaker Steve Shurtleff, a Democrat calling for Spillane’s “immediate resignation,” told the Monitor he believes the “inexcusable” post is an “incitement of violence” that puts residents’ lives at risk. Jordan Thompson, an activist affiliated with the ACLU and Black Lives Matter, said in a statement to the Monitor that the post is proof “white supremacy exists” in New Hampshire. “Remarks like these indicate a total lack of decency and respect for Black lives,” Thompson, who is also calling for Spillane’s resignation, added.

In 2019, Spillane reportedly lost his seat on a legislative committee after tweeting a photo of a squirrel that he illegally shot dead to an animal rights activist.

Spillane, a five-term incumbent, is up for reelection this year.

The Daily Dot has reached out to James Spillane for comment.