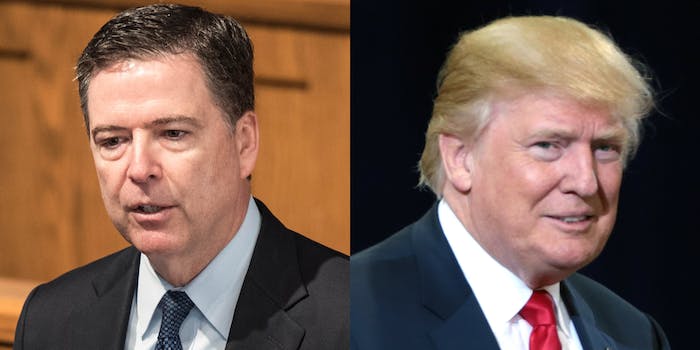 Comey apparently is willing to speak his mind.

If James Comey is going to testify in front of the Senate Intelligence Committee, he reportedly has one condition—it has to be in public.

That’s according to the New York Times, which reports that the former FBI director who was fired by Donald Trump this week declined originally to testify but told a newspaper source that he would testify if it was open to everybody.

On Friday, Trump tweeted in what could be construed as a threat that Comey had better hope none of his conversations with the president had been taped.

Trump said in an interview this week that he and Comey had dinner a week after his inauguration, and the president described the conversation as Comey asking him to keep him in his job. But the New York Times later reported that Trump had asked Comey multiple times that night for a pledge of loyalty, and each time, Comey said he couldn’t do it.

Since his tweet, neither Trump nor his press spokesman have commented on whether Trump has been recording his meetings as president. Press Secretary Sean Spicer also said Trump wasn’t threatening Comey in that tweet.