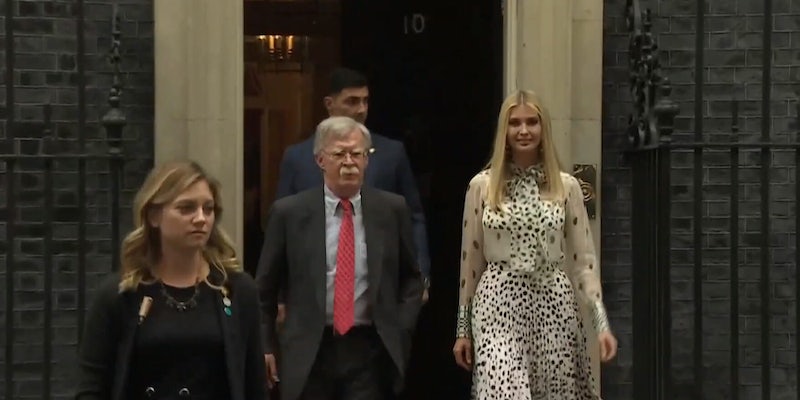 Ivanka Trump and National Security Adviser John Bolton were greeted with loud boos in the United Kingdom on Tuesday ahead of a news conference.

Trump and Bolton were caught on camera leaving 10 Downing Street before a conference with President Donald Trump and U.K. Prime Minister Theresa May as part of the president’s state visit to the country.

As the first daughter and Bolton are seen coming through a door, the two of them faced a crowd booing them.

Protesters in London greet Ivanka Trump and John Bolton with a torrent of boos, but Brian Kilmeade insists "it's not for Ivanka, it's for John Bolton, and he loves it." (h/t @atrupar) pic.twitter.com/9p7M5aHRqz

The moment was broadcasted by Fox & Friends, the Fox News morning show known to be a favorite of the president. As the boos were heard, Fox & Friends host Brian Kilmeade tried to downplay them, insisting they were not for Ivanka Trump, but instead just for Bolton.

“It’s not for Ivanka—it’s for John Bolton, and he loves it,” Kilmeade said. “He pretty much is looked at as somebody as the tough guy in that administration and he loves that label.”

The video clearly shows that the boos started immediately after the door opened, and Trump emerged from the building before Bolton.