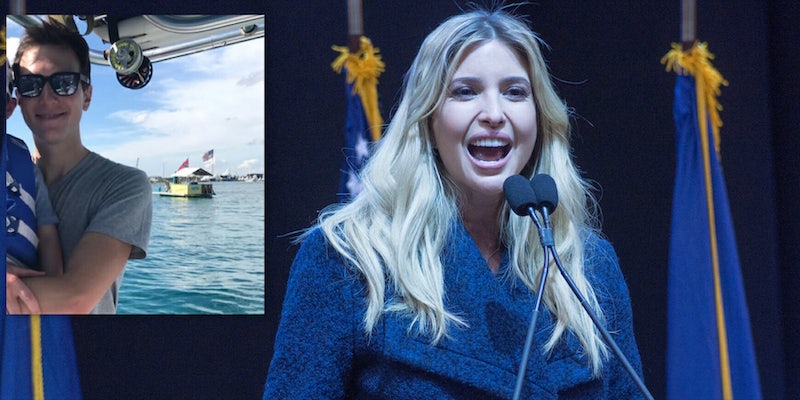 Look closely and you'll see it.

On Tuesday, Ivanka Trump, the daughter of President Donald Trump, did what any mom does post-holidays: shared family photos.

The only problem? One of the photos—featuring her husband Jared Kushner and their son during a fishing trip—shows a boat in the background flying the Confederate flag.

Here’s the photo of the flag. You can spot it and the American flag by the boat on the right-hand side of the photo:

Given the criticism her father has received for his defense of Confederate statues as “beautiful” and for his saying tearing them down would harm American “history and culture,” the Confederate flag flying in the background of a family photo might not be the best optics.

The New York Times wrote the president’s remarks about the Civil War statues echoed the “heritage not hate” phrase used by the Sons of Confederate Veterans, a group that has had racially-tinged controversies in the past, according to the Southern Poverty Law Center.

There are approximately 700 statues and monuments honoring the Confederacy in the United States.

The Confederate flag in the photo was not missed by eagle-eyed Twitter users.

The Rebel flag in the background. Can't hide Trump "class".

Of course there is a confederate flag in the background. https://t.co/7uwL6daPn7