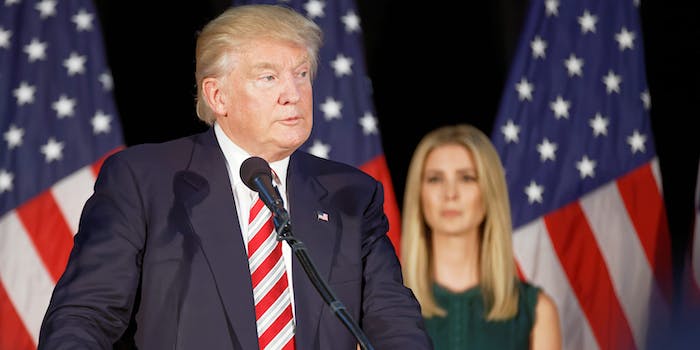 Ivanka Trump recently started a new job as assistant to the president.

President Donald Trump’s decision to launch airstrikes in Syria came in response to his daughter Ivanka’s “heartbroken and outraged” reaction to the chemical weapons attack, according to one of his sons.

On Thursday, Trump ordered the cruise missile attack on the Syrian government airfield that reportedly conducted last Tuesday’s chemical gas attack, which claimed the lives of up to 80 civilians in the rebel-held town of Khan Sheikhoun.

Speaking to the Daily Telegraph from the Trump Turnberry golf resort in Scotland, the president’s 33-year-old son Eric Trump claimed that his father’s actions were influenced by his sister, who recently took up an official White House employee as assistant to the president.

“Ivanka is a mother of three kids and she has influence,” he told British journalists. “I’m sure she said, ‘Listen, this is horrible stuff.’ My father will act in times like that.”

“Ivanka is by his side in Washington. She is not involved in everything. I think she comes and goes with issues she deeply cares about,” Eric Trump continued, shedding a little more detail on his sister’s informal yet privileged role in the White House. Ivanka’s husband, Jared Kushner, also serves within the administration as a special adviser.

However, the president’s son was quick to draw on the general international outrage conjured by the news of Assad’s chemical attack.

“There isn’t a single decent person in the world who saw those images and saw those kids being sprayed down by hoses to keep their skin from burning, who wasn’t deeply affected by what happened over there,” he reasoned. “It was horrible. These guys are savages, and I’m glad he responded the way he responded.”

When asked about Russia, one of Syrian dictator Bashir al-Assad’s closest allies, Eric described his father as “tough” and “not a guy who gets intimidated.”

Critics of Trump have pointed to how this military action in Syria indicated a dramatic change from his previous anti-interventionist stance. The president had long been an opponent of interference in Syria, vocalizing the position many times on Twitter throughout former President Barack Obama’s term in office.

In the face of that allegation, Eric Trump defended his father’s political turnaround: “…[A] leader gasses their own people—women and children—at some point, America is the global leader, and the world’s superpower has to come forward and act and they did with a lot of support of our allies, and I think that’s a great thing.”