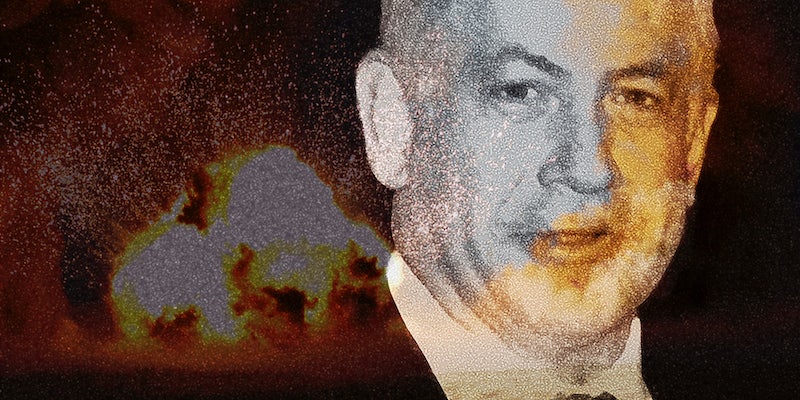 A catastrophic situation just got messier.

The recent explosion of violence in Gaza may have been initially sparked by false or inaccurate claims, according to Israeli police.

The ongoing conflict began last month when three Israeli teenagers were kidnapped from a Jewish settlement in the occupied West Bank. Their bodies were later discovered in a field outside the city of Hebron. Before police were able to determine who was responsible, Israeli Prime Minister Benjamin Netanyahu placed blame for the tragic deaths squarely on Hamas, Gaza’s elected political leadership—an accusation that may prove to be false.

On Friday, Chief Inspector Micky Rosenfeld, foreign press spokesman for the Israel Police, reportedly told BBC journalist Jon Donnisonhe that the men responsible for murders were not acting on orders of Hamas leadership. Instead, he said, they are part of a “lone cell.” Further, Inspector Rosenfeld told Donnison that if Hamas’ leadership had ordered the kidnapping, “they’d have known about it in advance.”

Seems to contradict the line from Netanyahu government. 2/2

Naftali Fraenkel, 16, Gilad Shaer, 16, and Eyal Yifrah, 19, were kidnapped on June 12 from Gush Etzion, an Israeli settlement south of Jerusalem. After an exhaustive search that lasted over two weeks, security forces discovered the boys’ bodies in a field just north of Hebron, close to where they were abducted. The night of their disappearance, one of the boys called a police hotline and whispered, “They kidnapped me.” Police speculate that he may have been caught, leading the perpetrators to kill the teenage boys.

Husam Dofsh, a former member of Hamas, was arrested on suspicion of his involvement on July 5. After learning that he was a suspect, Dofsh called the Times of Israel and insisted he’d taken no part in the kidnapping. “I saw online, and people also told me, that I was tied to the mess, but I did not kidnap and didn’t do anything. I just want to continue my life,” Dofsh told reporters.

During the course of Israel’s investigation, some 400 Palestinians were arrested and up to 10 others were killed. Among those detained were Aziz Duwaik, the speaker of the Palestinian Legislative Council and West Bank-based member of Hamas; and Mahmoud al-Khatib, a Hamas legislator was also reportedly abducted by the IDF during a dawn raid in the city of Bethlehem.

Israeli police spokes Mickey Rosenfeld also said if kidnapping had been ordered by Hamas leadership, they’d have known about it in advance.

Mickey Rosenfeld said lone cells much harder to track. Said they would find whoever was now protecting the two suspects.

Israel’s crackdown in the West Bank instigated Hamas to begin firing rockets into Israel—a move that quickly escalated the conflict.

In early July, several members or activists connected to Hamas were killed, including a 14-year-old boy, which led the group to intensified their rocket attacks. Although there were no resulting deaths, the Israeli Defense Force (IDF) began successive airstrikes on the Gaza Strip.

“Hamas is responsible, and Hamas will pay,” Netanyahu said in reference to the kidnapping. However, Inspector Rosenfeld’s statements, along with a number of reports concerning the identities of known police suspects, seem to indicate that Hamas leadership was not involved in the vicious crime.

Meet the doctors operating in Gaza’s most dangerous hospital

The two more-likely suspects are Amer Abu Aysha and Marwan Kawasme, who have been missing from their homes since the night of the kidnapping. Police found cellphones and prepared food caches in their homes. Both had recently opened bank accounts in their wive’s names. Palestinian security forces reported that Abu Aysha and Kawasme were missing to the Israelis the day after the kidnapping occurred, according to Al Monitor.

“That was the first clue in the investigation and the reason why Israel pointed an accusatory finger at the Hamas infrastructure in Hebron,” wrote Shlomi Eldar, a veteran journalist who has covered the Palestinian Authority for the past two decades.

Abu Aysha and Kawasme are known members of the Qawasameh tribe, according to Palestinian security forces. While members of Hebron-based Qawasameh clan identify with Hamas, they have a history of undermining its efforts to end violent conflicts with Israel. In 2003, for instance, the family sent two suicide bombers to blow up a bus in Jerusalem after a tahadiyeh (ceasefire) had been successfully negotiated between Israeli and Palestinian fighters, which was endorsed by Hamas founder Ahmed Yassin.

At the time of writing, a reported 848 Palestinians and 35 Israelis have been killed, including 208 children in Gaza, since July 8 when Israel launched Operation Protective Edge.

A number of Middle East journalists have written articles accusing the Israeli government of politicide—launching Israel into renewed conflict with Hamas in order to sabotage the formation of the unified Palestinian government that it so adamantly opposed. Vanetia Rainey, a Lebanon-based correspondent for The Week, wrote: “Israel must have known that [the] Palestinian Authority would not want to be seen to condone violence and would have to cooperate with the campaign of raids, something Hamas has been sharply critical of, calling it ‘harmful to Palestinian reconciliation’.”

“The Gaza demands of stopping the aggression and lifting the blockade in all its forms are the demands of the entire Palestinian people and they represent the goal that the Palestinian leadership has dedicated all its power to achieve,” he said.

The killing of 15 women and children by the Israel Defense Force at a UN elementary school in Beit Hanoun appears to be unifying Palestinians, but not through a shared interest in diplomacy. Roughly 10,000 protesters in the West Bank marched on Jerusalem Thursday after the school bombing. Two were killed and hundreds injured when the march clashed with Israeli police near the Qalandiya refugee camp.

On Friday, Hamas called for a third intifada and Abbas called for a “Day of Rage” marked with increased protests. “This is your opportunity,” a Hamas spokesperson said in response to the protests.

If the reported findings of the Israeli Police hold up and Hamas is officially cleared of any wrongdoing in the case of the three kidnapped Israeli teens, Netanyahu and the Israeli government may have to explain why a massive military operation, with an 80 percent rate of civilian casualties, was instigated under a false premise. And if violence in the West Bank continues to spread, the IDF may find itself divided on two fronts.

Correction: Israel’s crackdown in the West Bank—not Gaza—following the discovery of the three murdered Israeli teens instigated Hamas into firing rockets on Israel. We regret the error.

Photo via US Gov’t/Wikipedia (PD) | Remix by Jason Reed