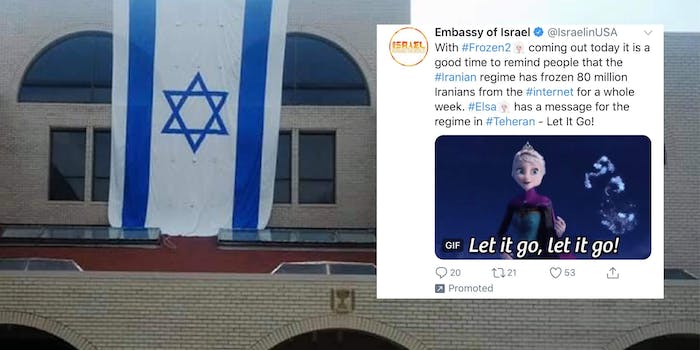 It was called 'Weapons-grade cringe.'

A year ago, the Ringer writer Kate Knibbs christened this the “golden age of weird promoted tweets.” Knibbs wrote of individual users co-opting the feature to more widely disseminate their latest epic missive about breakfast cereal or whatever.

Like all good things that begin organically, brands and other organizations have jumped on the weird promoted tweet bandwagon.

“With #Frozen2 coming out today it is a good time to remind people that the #Iranian regime has frozen 80 million Iranians from the #internet for a whole week. #Elsa has a message for the regime in #Teheran – Let It Go!” the Embassy of Israel to the United States tweeted from its verified account on Nov. 22.

With #Frozen2 coming out today it is a good time to remind people that the #Iranian regime has frozen 80 million Iranians from the #internet for a whole week. #Elsa has a message for the regime in #Teheran – Let It Go! pic.twitter.com/nVclkxvJop

People were pretty stunned by the flippancy of likening the premiere of a Disney movie to a government attempt to freeze the flow of information in response to massive civil unrest, particularly in light of accusations of human rights abuses and extrajudicial killings by the Iranian regime. “This is a pretty glib way to talk about a government that’s probably killed over a hundred of its own people in a week,” tweeted Mike Sexton, cyber program director of the Middle East Institute.

Rather than coming across as a justifiable critique of Iran, Israel’s enemy, the tone-deaf tweet further served to shine a light on what many view as Israel’s bad behavior, particularly towards Palestinians.

About a week later, the embassy’s bizarre use of Frozen 2 to publicize Iran’s massive internet blackout started popping up in timelines as a promoted tweet.

It did not go over well. “Cringe,” was an extremely common reaction. Some wondered what Disney, a notorious defender of copyrights, had to say about it. Most were just appalled.

The promotion was even featured by Promoted Tweets, an account that solely documents bizarre promoted tweets.

this is truly the craziest sponsored ad I’ve gotten. Israel is using Frozen 2 to support heightened sanctions against Iran pic.twitter.com/Df5tcxNJ7F

Which force is more powerful in America: the Israel lobby or Disney defending/expanding its copyrights? Which excites more fantasies: Zionism or the Magic Kingdom? If Disney lets this pass, how would that affect its brand in international markets?

"With Frozen 2 coming out soon! it's a good time to remind you of the frozen dead bodies of women and children we have left in Gaza! Join Us and Elsa as we tell the world "LET IT GO!""

Why is Disney allowing this? No copyright issue, they don't care? I'm going to assume Disney wants to kill Iranian children. Time to boycott Disney…

Let’s count the lawsuit charges: Illegal unauthorized use of copyrighted image and name, for starters.
Not illegal, but worst taste in paid ad politicization of a beloved character should also be awarded here

I don't think they thought this one through. Israel drawing attention to their foreign policy while advertising for a movie whose central theme (among others) is "the past is not what it seems" may not go so well. Just saying.

It’s unknown whether the embassy selected the tweet for promotion or if was chosen via Twitter’s Promote Mode, which randomly selects tweets to promote.