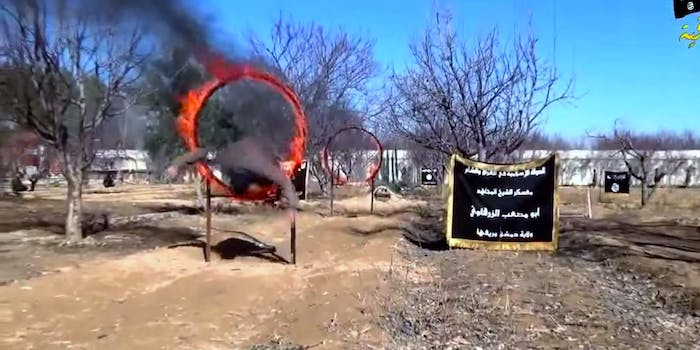 The world's most terrifying workout routine.

Everyone has their favorite workout video, their hallmarks being cheap production quality and questionable routines has turned them into a trope. Joining in on the ripe exercise program market is the Islamic State of Iraq and Syria (ISIS), the group that was too extreme for Al-Qaeda and is currently occupying large swathes of Iraq and Syria due to their brutal tactics.

The video, entitled “ISIS Jihad Training Program,” is 45 minutes long and features how-to guides for aspiring jihadists. Want to learn how to jump into a moving pickup truck with an AK-47 in your hand? This video will teach you. Along with jumping through flaming hoops, and making a human pyramid, it promises an all around workout. Featuring ISIS flags and cries of “Allah Akhbar” throughout, the video seems to be a production of the group, which is known to use social media as a propaganda tool, and is hosted on a channel called “ISIS Land of Tawheed.”

Bearing the classic features of an Islamic terrorist video including sung prayers as backing music, along with questionable lighting, the video is tagged as an “Islamic State Workout Program,” which raises the question as to whether this video is meant to inspire other possible fighters around the world.

Whatever the reason behind the video, it reveals ISIS as something much more than a ragtag group of fighters—they are a terrifying group of trained extremists hell bent on destruction, and they won’t rest until they’ve got the perfect abs.