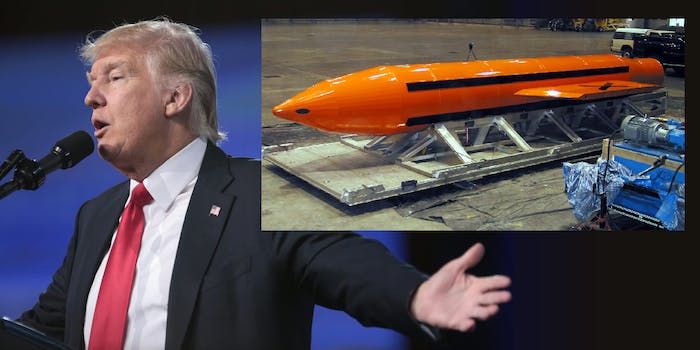 U.S. kills 36 ISIS fighters in ‘mother of all bombs’ attack

The bomb was designed in 2002 to send a message.

The U.S. military on Thursday dropped the largest conventional weapon in its arsenal—nicknamed MOAB or the “mother of all bombs”—on an ISIS tunnel network in Afghanistan, killing 36 militants and completely destroying the operational base.

The attack took place in the Achin district in Nangarhar province, near the Pakistan border, where Afghan forces have been facing off against the group of Islamist fighters who had been utilizing the tunnels. The road leading to the cave complex is heavily mined.

No civilians were killed, but local villagers described the “earsplitting blast” as if “the heavens were falling.” One individual told the Guardian, “the earth felt like a boat in a storm.”

Drone footage of the strike conveys the sheer scale and devastation caused by the military’s largest non-nuclear weapon.

NATO commander U.S. Gen. John W. Nicholson insisted at a news conference that the choice of bomb was necessary: “This is the right weapon for the right target… it was the right time… tactically.”

“Let me be clear—we will not relent in our mission to destroy [the Islamic State]…” he continued. “There will be no sanctuary for terrorists in Afghanistan.”

The bomb itself was developed by the U.S. Air Force in 2002 and is so large, more than 30 feet long, that it must be dropped from a C-130 Hercules plane. It’s particularly effective when used on tunnel networks, where it detonates far above ground level without making contact with the earth.

“What it does is basically suck out all of the oxygen and lights the air on fire,” explains Bill Roggio, of the Foundation for Defense of Democracies. “It’s a way to get into areas where conventional bombs can’t reach. They were wanting to collapse tunnels, and they don’t know exactly where the tunnel is so they want to cause an earthquake to cave them in.”

There’s little doubt that in these current times, as the Trump administration flexes its military muscle in the Middle East and Pacific, the use of the MOAB is intended to send a message. Although developed prior to the Iraq war, it was never used in combat, and instead was considered a non-nuclear deterrent.

“The goal is to have the pressure be so great that Saddam Hussein cooperates,” former Defense Secretary Donald Rumsfeld is quoted as saying of the bomb in a 2003 interview. “Short of that—an unwillingness to cooperate—the goal is to have the capabilities of the coalition so clear and so obvious that there is an enormous disincentive for the Iraqi military to fight against the coalition.”

Former Afghan President Hamid Karzai, however, condemned the use of the weapon as “an inhuman and most brutal misuse of our country” and called on Afghans to “stop the USA.”

2/2 military. This is not the war on terror but the inhuman and most brutal misuse of our country as testing ground for new and dangerous…

Other criticism came from Russia, which had condemned the Trump administration’s most recent cruise missile barrage on the Syrian regime’s air base. The ever-witty Russian embassy in London referenced America’s historic involvement in the region when it tweeted its quirky take, which effectively blames the U.S. for creating the problem it sought to alleviate with the historic bombing.