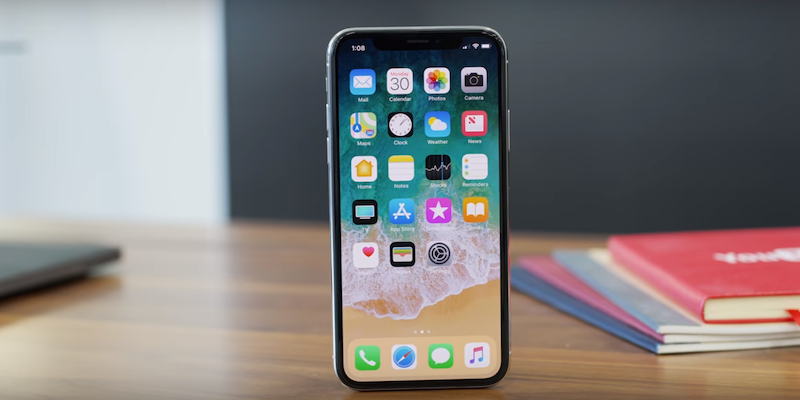 The iPhone X has received favorable early reviews, but it's far from perfect.

Can the iPhone X prove to be the game-changer Apple wants—and needs—it to be?

That’s the question on everyone’s mind on Tuesday, as reviews start trickling in before its official release on Friday. While reviews for Apple‘s $1,000 flagship phone are largely glowing, there are a few complaints to be found across the board.

Here are the five things reviewers don’t like about the iPhone X.

Reviewers agree that the X has the best screen of any iPhone. But there’s one glaring problem with Apple’s decision to spread the display to the very top of the device: that ugly, awkward notch.

Nilay Patel at the Verge says the cutout that goes around the sensor housing isn’t too bad in portrait mode, but it is “definitely intrusive” in landscape mode, making it “generally pretty messy.”

“Unfortunately, the top of the display is marred by that notch, and until a lot of developers do a lot of work to design around it, it’s going to be hard to get the most out of this screen. I mean that literally: a lot of apps don’t use most of the screen right now.”

Julian Chokkattu at Digital Trends says Apple’s best efforts to disguise the notch weren’t enough to keep it from being distracting.

“iOS gracefully splits the top status bar in half around the notch, and many native apps also tailor their designs to it, but it’s easy to feel a break in immersion when watching YouTube videos and movies on Netflix.”

There’s nothing to like about the notch—it was a compromise Apple settled on so it could house eight different components—but some are less irked by it.

Lance Ulanoff at Mashable said he’d be lying if he said he didn’t notice the notch but got used to it quickly.

“It cuts into full-screen apps, movies, and photos, but, after a little while, I stopped fixating on it…The complaints will, I suspect, mostly be from people who do not own or use an iPhone X.”

TechCrunch’s Matthew Panzarino didn’t hold back, saying he didn’t “give a rat’s ass” about the notch and recognized that it was a necessary design trade-off.

“And beyond ‘dealing with it’ I can tell you that as one of a few people outside of Apple to have used it for more than a day — you stop noticing it very, very quickly.”

The most controversial iPhone X feature, Face ID is Apple’s new facial-recognition authentication method. Because there’s no other way to unlock the device aside from clunky on-screen methods, Face ID needs to be 100 percent accurate. Unfortunately, it isn’t.

Chokkattu at Digital Trends unfavorably compared it with the fingerprint sensor on previous iPhones.

“Face ID still feels like a work in progress at times. It’s slower to get into your phone with, and it’s something we actively think about when trying to use our phone — we always need to double check it unlocked our device, and we didn’t have this issue with Touch ID.”

Nilay Patel at the Verge said Face ID “works, mostly.” He didn’t have problems in dark settings but said it became inconsistent under bright light.

“The bad news is that sometimes it doesn’t [work great], and you will definitely have to adjust the way you think about using your phone to get it to a place where it mostly works great.”

Geoffrey Fowler at the Washington Post said it worked “nine out of 10 times” but was less annoyed by its inaccuracy than how Apple chose to integrate it with iOS 11.

“Apple made an annoying decision to not make the iPhone X just open to the home screen when it spots your face. Instead, it unlocks to a screen full of notifications. To get home, you have to swipe up from the bottom edge of the phone with your thumb.”

Because the iPhone X doesn’t have a home button, Apple added a bunch of gestures that help users navigate iOS 11. But learning and remembering them can be tedious.

Mark Spoonauer at Tom’s Guide said it took some time to get used to the new motions.

“Over the first day of use, I really had to reprogram my brain to swipe up to exit apps, as opposed to just pressing a button. I also had to remember to swipe up and then hold to see all my open apps, compared to just double tapping the Home button on earlier iPhones. It adds a hair of a delay where there was none before.”

“That said, it’s not perfect. Using the new app switcher seems just a hair slower than double-tapping the home button, and trying to close an app takes a little more effort than it should. Instead of swiping up on an app window to dismiss it, you have to press and hold the window, then tap a close button on the corner.”

Reviewers have come across several apps that aren’t optimized for the iPhone X’s edge-to-edge display and wide 19.5:9 aspect ratio.

Patel at the Verge calls the resulting effect a “software bezel,” where a bunch of unused pixels create a border around whatever image you’re looking at. Patel goes on to list several apps that haven’t been updated, including Google Maps, Slack, Delta, and Spotify.

“Apps that haven’t been specifically updated for the iPhone X, but use Apple’s iOS autolayout system will fill the screen, but wacky things happen: Dark Sky blocks out half the status bar with a hardcoded black bar of its own…It almost looks right, but then you realize it’s actually just broken.”

Velazco at Engadget also ran into third-party app compatibility issues, admitting seeing them for the first time was “more jarring” than expected.

“When you fire up, say, Gmail, it’s bounded on the top and bottom by empty expanses that frankly make the X look a little silly.”

“But, as it stands, the X doesn’t feel like the ‘future of the smartphone’ when I open some of my most-used apps. It feels like I’m looking at the same slab of glass I’ve seen for the last decade.”

This should come as no surprise. The $1,000 iPhone was always going to take heat from reviewers for its monstrous price tag.

“If you don’t really care about phones or about having the latest and greatest, then there’s really no need to buy an iPhone X. Save some dough.”

Other reviews casually dropped “pricey” or “expensive” under “cons.”

There you have it, the five things reviewers (so far) don’t like about the iPhone X. Keep in mind, many reviewers have only had the phone for 24 hours, and there is still time for Apple to make some adjustments before the phone ships to consumers.

The 10th-anniversary device will be available in limited quantities at Apple stores on Nov. 3 at 8:00am local time. If you don’t want to wait in line, you can always preorder the phone directly through Apple or from the big four U.S. carriers, but prepare for shipping delays.