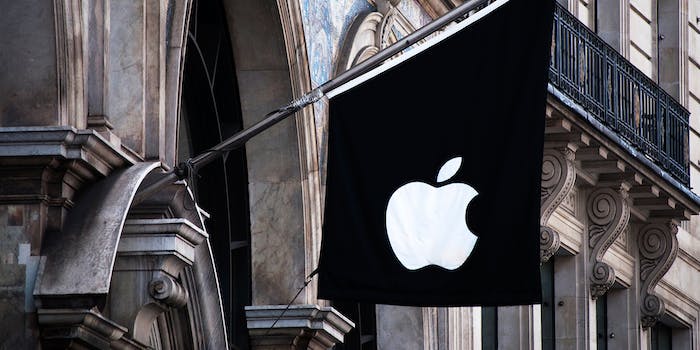 Is Apple pulling a fast one on us?

In a piece the New York Times appropriately titled “A Big-Data Conundrum,” Harvard Economics Professor Sendhil Mullainathan contemplates a data experiment undertaken by Ph.D student Laura Trucco, all in the name of a slow iPhone.

Trucco took a look at Google Trends, which aggregates Google searches, to come to the hypothesis that iPhones in the wild actually slow down around the time that the next iPhone launches. It’s something that intuitively makes sense and anecdotally feels true, but there’s no clear causality to be found. The Google Trends graph, revamped by the New York Times: 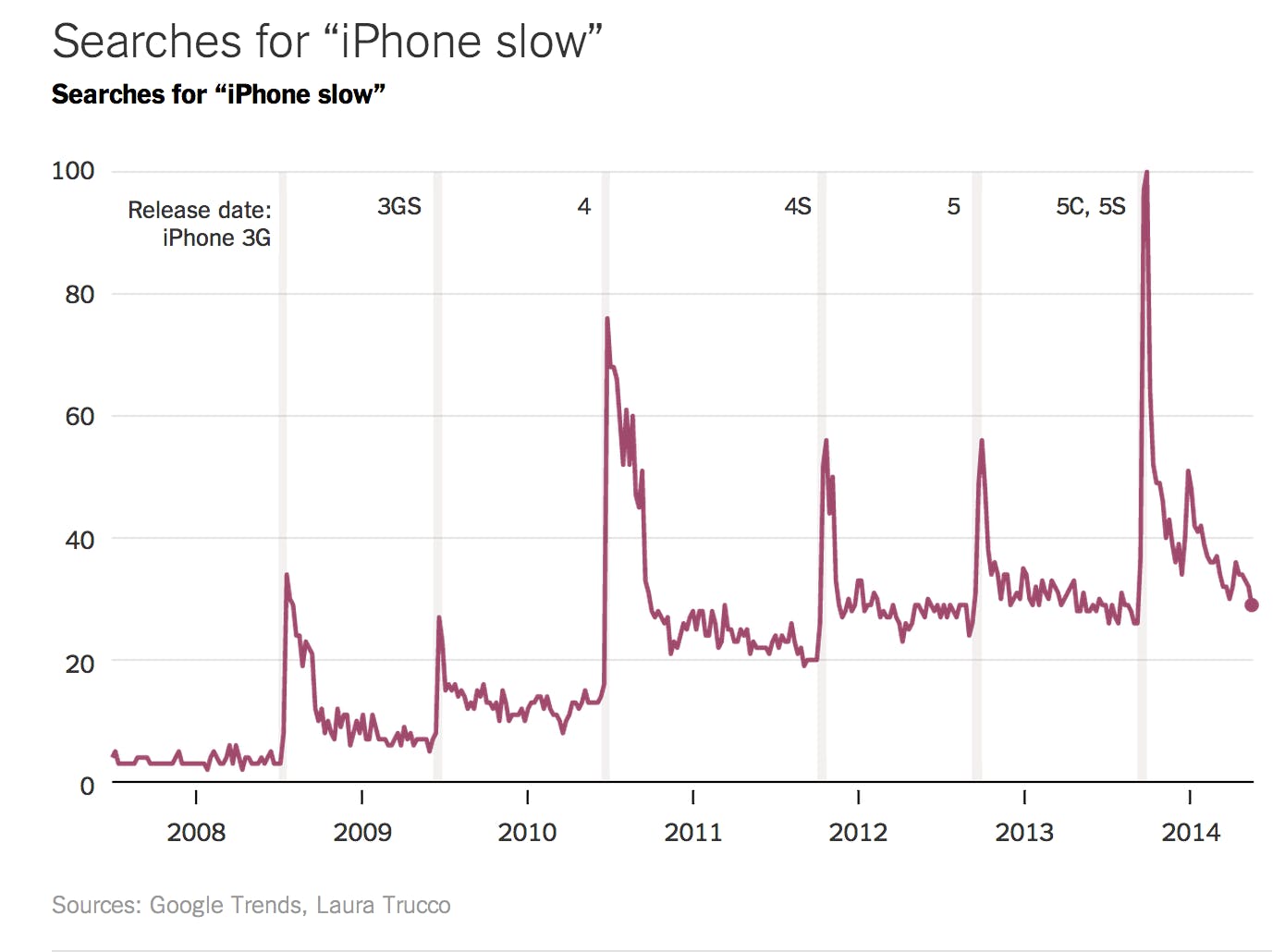 Something a bit confusing here is that the “peak” actually represents the full week in which the search term was the most popular. Here are some specifics to put the last two peaks on the chart in context:

Accusing Apple of planned obsolescence is nothing new. But disentangling the phenomenon of smartphones that feel like they slow down over time is next to impossible. For one, we pile more apps and data onto our phones over time. Like driving a new car off the lot, it’s all downhill from day one. The other big factor, which is admittedly more complicated, is the role of software updates.

For Apple, an iOS release is huge. That’s mostly because the company usually rolls out its big releases to all eligible iPhone users at once, a process that happens completely differently in the comparatively fragmented Android ecosystem. Big software updates come with big new features designed to showcase a new generation of hardware. Often, these features don’t quite shine on last-generation smartphones.

The New York Times piece addresses some of the nuance of easy big data comparisons, but it leaves a few things out. As I mentioned, given the radically different release schedules of their respective mobile operating systems, a comparison to the Samsung Galaxy series smartphones doesn’t really work.

Another layer not well examined is that all of the peaks aren’t created equal. The 2013 spike in searches for “iPhone slow” is clearly an order of magnitude larger than its direct predecessors and the 2010 spike is the next biggest. The iOS 7 update in 2013 was inarguably the most radical to hit the iPhone in years, thus it’s not surprising that more users might take note of a perceived decrease in performance and turn to Google. In 2010, the release of iOS 4 had iPhone 3G users up in arms over widely reported performance issues.

Given the iterative nature of the iPhone 3GS and iPhone 5S updates in those respective years, it wouldn’t make sense for consumers to go as crazy looking for a good excuse to upgrade as they would in a true new iPhone release year (the iPhone 5, for example). 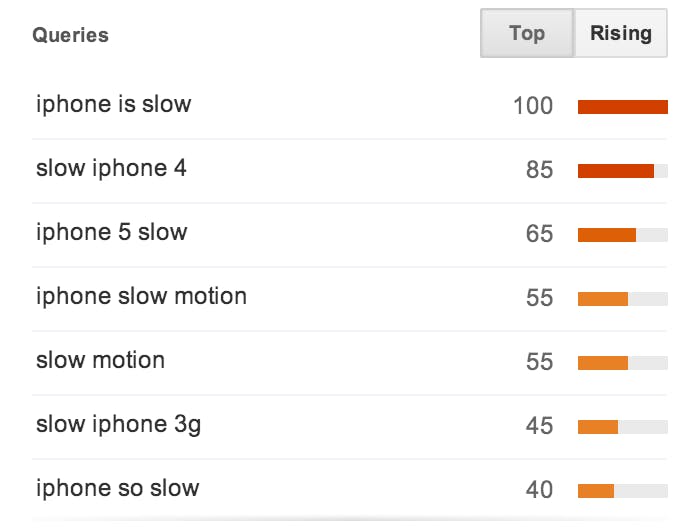 To further complicate matters, the iPhone 5S launched with a camera capable of capturing slow motion video. Beyond Touch ID, a fingerprint unlocking feature, slow motion was one of the only things that made the iPhone 5S distinct from the iPhone 5. I know that I trail off in Google often, assuming that the search engine’s autocomplete function will figure out what I mean without typing the entirety of what I’m after.

Making matters even more confusing, iPhone market penetration has risen year over year, so we’d expect these spikes to grow accordingly, though not necessarily map onto a planned obsolescence scheme on Apple’s part.

As the New York Times piece rightfully points out, the peaks in Google Trends might just be a matter of confirmation bias:

… That’s all it shows: People suddenly feel that their phone is slowing down. It doesn’t show that our iPhones actually became slower. Imagine that someone points out a buzzing sound in your office. Until then, you hadn’t noticed it. But now you can’t hear anything else. Perhaps this is the digital equivalent of that experience: Hearing about a new release makes you contemplate getting a new and faster phone. And you suddenly notice how slow your old phone is.

After all, what better than a little big data to back up an impulse buy?