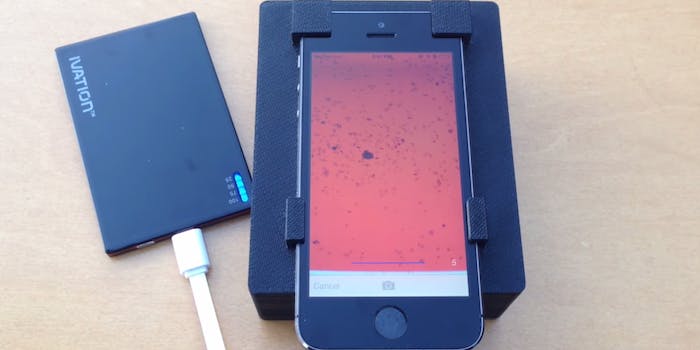 This could be the biggest thing the iPhone has ever done.

Blood-borne parasites in Africa are a massive threat that has left countless people blind, brain damaged, and dead. Regular blood tests can prevent infections, but they are complicated and sometimes too expensive. A new initiative from the University of California–Berkeley seeks to make the potentially life-saving process significantly easier using a modified iPhone.

Berkeley researchers have been working on tools to turn Apple‘s smartphone into a powerful microscope for several years now. Scientists originally used the now-antiquated iPhone 4 with their special CellScope prototypes.

This time around, the Berkeley team harnessed the power of the iPhone 5s to scan blood samples, analyze the data, and determine whether the patient had been infected with a parasitic worm.

The iPhone, along with a small base unit that houses an Arduino controller, Bluetooth hardware, and a stage to hold the samples for scanning, can complete the test in approximately two minutes.

Berkley’s lab is currently putting the new setup through its paces in Cameroon, where an estimated 40,000 people will be tested using the devices.