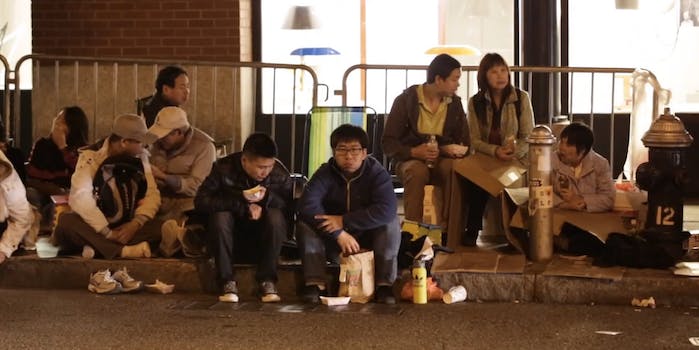 First in line for the new iPhone? Not the tech geeks you'd assume.

Media profiles of Apple fans waiting for the new iPhone 6 often focus on the quirky and fun. Tech startups use the lines to drum up media attention, and some even us the space to make grand statements to their loved ones.

What YouTuber and filmmaker Casey Neistat documented at several New York City Apple stores on the eve of the iPhone 6 release paints a much bleaker picture.

The lines were dominated by Chinese men and women, who Neistat communicated with by way of a translator. They had been lined up for two days, and engaged in scuffles with police over sleeping on the sidewalk.

someone offered this guy $1,000.00 for his spot in the iPhone line. he’s holding out for more pic.twitter.com/JGOrqzm1UD

All the people Neistat spoke with claimed to be purcashing phones for themselves or their families, but the cameras caught them delivering phones to unidentified men and accepting cash payment. All the phones were paid for in cash at the store and each line-dweller purchased two phones. The video concludes with police standing by and an irate man complaining that “everyone knows.” According to Quartz, as many as 5 million new iPhones could be smuggled back into China, as demand trumps supply.

The iPhone black market has surged following the release, with phones on eBay going for more than $1,400. Shoppers use these means to get a phone without waiting for Apple to get through their backlog, but with Neistat putting a face on the men and women who are spending days of their lives sleeping on sidewalks to supply this alleged black market, perhaps some will think twice.