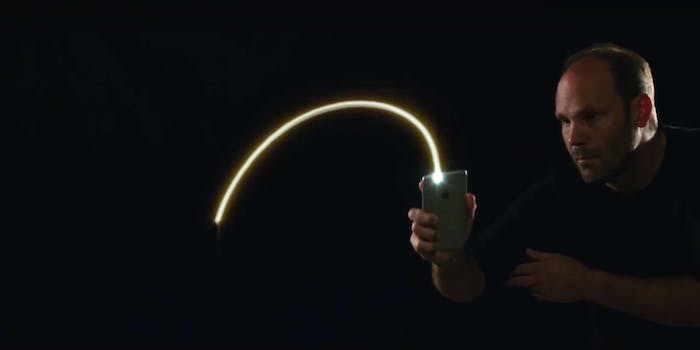 This web app, combined with an iPhone, lets you draw in 3D space

When Apple released its new iPad Pro last week, it supported the device with an accessory called the Apple Pencil—a connected stylus for digital artists to draw on the massive tablet. An engineer just one-upped Apple by turning the iPhone into a pencil and the air into the notebook.

Air Pencil is the invention of Finnish-American engineer Nils Forsblom. The web app turns just about any phone into a digital writing utensil that can scribble out anything you tell it, and does so in three dimensions.

What is most impressive is the process doesn’t require fancy motion capturing sensors or high-demand processes that will set your phone ablaze just trying to run it; Air Pencil is powered entirely on the web.

“It is a lightweight app that runs on a mobile web browser. All you need to get started is a URL,” Nils Forsblom told the Daily Dot. ” A remote server processes most of the information tracked by the smartphone’s magnetometer, accelerometer, and gyroscope. Options for panning and zooming also exist within the web app, which Forsblom said, “you can think of as your virtual camera in the 3D space.”

Recording a drawing is like capturing a video for Snapchat—press and hold on the screen to begin recording, then release to stop. From there, machine algorithms relay the collected sensor data into precisely reproduced movements that result in an image that can literally circle around you.

Forsblom grew up around art, and the influence is not lost in his latest creation. Air Pencil takes inspiration from the famous pictures of Pablo Picasso painting with light. In 1949, the effect was captured with triple exposure through the lens of photographer Gjon Mili’s camera.

In 2015, the same concept—which has been around since as early as 1889—is given life thanks to the whirling parts and humming processors built into a smartphone.

The creation seems out of place for Forsblom’s company, Adtile Technologies, a mobile-first advertising firm. The company has primarily spent time building a platform to serve up native ads with a responsive touch that change with movement and gestures. The CEO and founder told the Daily Dot that Air Pencil is just the next step in the company’s goal to improve the mobile experience, a process that is powered by Adtile’s proprietary motion technology.

“We want to power both mobile advertisers and mobile application developers to harness the power of freeform motions from the users—natively or in any browser—on any mobile device,” Forsblom explained. “In essence Adtile wants to create a standard for motion and gesture technologies.”

Potential applications for the Air Pencil are about as winding and formless as the drawing style it enables. Forsblom suggested it could be used for just about any type of communication, collaboration, or creative work.

From scribbling messages via an instant messaging app to sketching out a model to send off to a 3D printer, just about everything is on the table of possibilities for Air Pencil. Forsblom isn’t interested in shackling the app to a single service, but rather intends to see what developers might do with the technology.

If you’re artistically inclined and want to leave your mark on the digital world or just want to wave your phone around aimlessly and see if your doodles look better in an additional dimension, you can request access to the Air Pencil beta. You might just draw your very out Picasso-esque masterpiece.