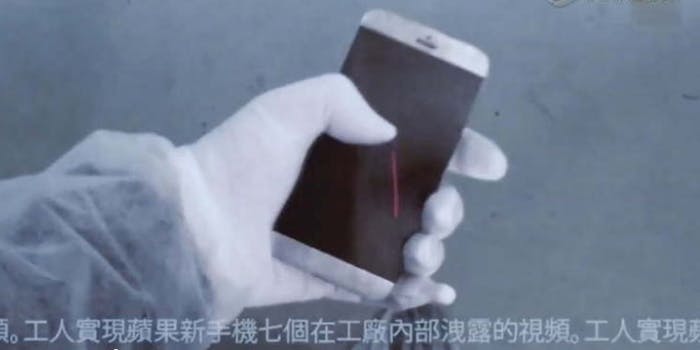 No, this video hoax doesn’t show the iPhone 7

Whatever it is, it isn’t the next iPhone.

The iPhone 6s and 6s Plus launched exactly 88 days ago, and we already have our first rumored glimpse at what its successor could look like. A video claiming to come from inside a Foxconn manufacturing facility in China—where Apple’s smartphones are made—shows what we are asked to believe this is an in-production version of the iPhone 7.

The phone in the video looks like a cross between an iPhone and an HTC One, with a bezel-less display, no home button, and the signature Apple logo placed in the center of the backplate. The camera lens has been relocated to the center of the body, directly above the logo, and the entire device appears to be made out of polished aluminum.

There are quite a few problems with the video itself that point to it being nothing more than a hoax. The way the video itself is shot is a huge red flag. It’s intentionally shaky, there are no close-up shots of the phone, its ports, the logo, or the screen, and a B-movie quality “Hey!” shouted from off-camera—which we are supposed to think is the leaker being caught red handed.

Even the brief glimpse we get of the cameraman’s attire, complete with a Foxconn logo that appears to be little more than the company logo on a cut-out piece of printer paper, appears to be a low-budget hoax. 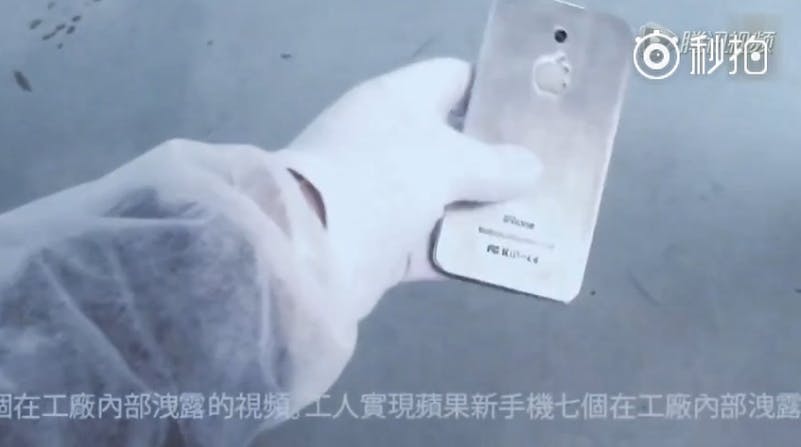 Then there’s the matter of the video being leaked in the first place. Foxconn is notorious for its prison-like working environment where secrecy is a top priority. The chances that an employee with access to an iPhone prototype managed to sneak a phone or other video-capable device inside, shoot the footage, and then make it out after being supposedly caught are so slim that they don’t register.

On top of all that, the timing of the leak is unbelievable. Anyone with knowledge of iPhone production cycles can tell you that major component production for the next iPhone likely hasn’t even begun yet. Foxconn simply wouldn’t have the hardware on hand at this early stage, and certainly not enough finalized components to put together a device like the one seen in the video.

In short, the weird HTC-inspired phone you see in the clip is likely nothing more than a Chinese knockoff device or perhaps even just a prank from top to bottom. Whatever it is, it isn’t the next iPhone.