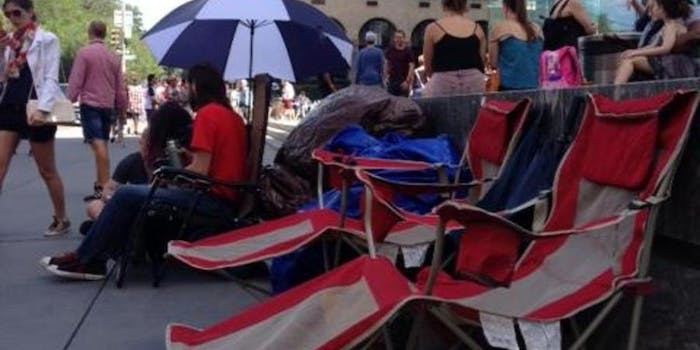 It’s not because they’re Apple superfans.

Ten years ago, if you had a business venture you wanted to promote, you likely had to buy online or broadcast advertising space to do so. But now, it’s as simple as camping out in front of the Apple Store in midtown Manhattan for a few days.

That’s what I learned this afternoon when I visited the Apple Store on 57th Street and 5th Avenue, where a handful of people are already waiting in line outside the store to purchase the iPhone 6, the much buzzed-about upcoming version of Apple’s iPhone.

No one knows when, exactly, the iPhone 6 is coming out. (Rumor has it that it’ll be released around Sept. 19, or at least a week and a half after Apple’s upcoming, much-buzzed-about keynote event on Sept. 9.) But that hasn’t stopped these brave souls from camping out in one of the busiest intersections of midtown Manhattan 20 days before the iPhone 6’s anticipated release date, with sleeping bags, business cards, and promotional T-shirts in tow. 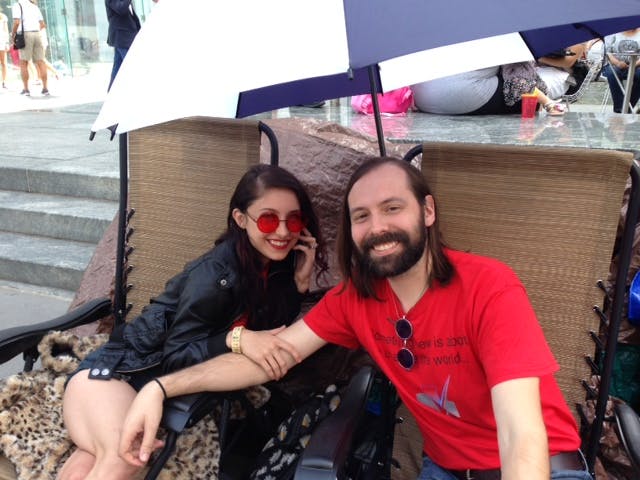 “We’re trying to promote our telemedicine app that’s coming out,” said Jason Ray, the extremely affable chief external consultant of VideoMedicine, an app that will let you pay by the minute to Skype with medical professionals. He traveled to New York City with his wife of seven years, Moon, from their hometown in Jackson, Miss., arriving at 4pm on Sept. 1. This is their first visit visiting New York, and they’ve already talked to about a half-dozen reporters, as I saw when Jason added my name and contact info to a list of publications in his iPhone 5.

“We’re basically just out here trying to raise awareness about access to care,” Moon Ray said. She says more than 50 percent of New Yorkers don’t have cars, which makes it difficult for them to have immediate access to medical care. (As a native New Yorker, I can think of about 90 things wrong with this statement, but Moon and Jason have a tough road ahead, so I do not correct them.)

“We want people to know you can video chat with doctors and that’s why the iPhone is so cool,” Moon said. “Especially because the next one will have better glass, a better screen.”

Moon and Jason weren’t the first to arrive at the Apple Store, only managing to procure the first spot in line after paying the group in front of them $1,250 each. This group includes Brian Ceballo and Joseph Cruz, two cousins and musicians/actors from Brooklyn and Staten Island. I meet them while they’re eating Chinese takeout on the plaza and taking a break from talking to reporters. This is their fifth year in a row waiting for the iPhone. (They first waited on line for Apple’s first iPad, which was released in 2010. “It rained the whole time,” Ceballo said.)

“We’re here because of the hype, because there are so many opportunities that come by,” Ceballo told me. “Like last year, I met this guy from Sony. I met people from the acting world, too.” 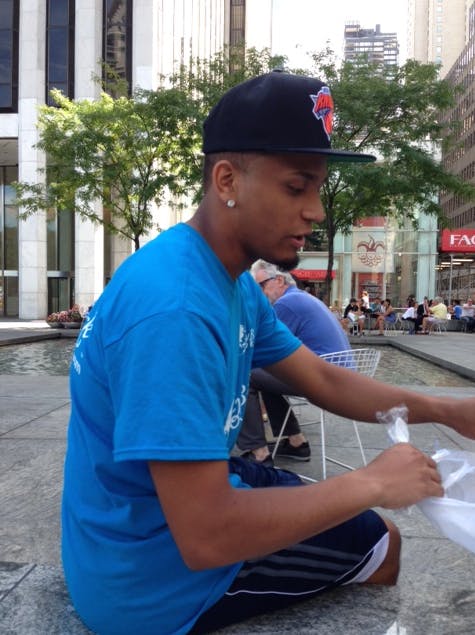 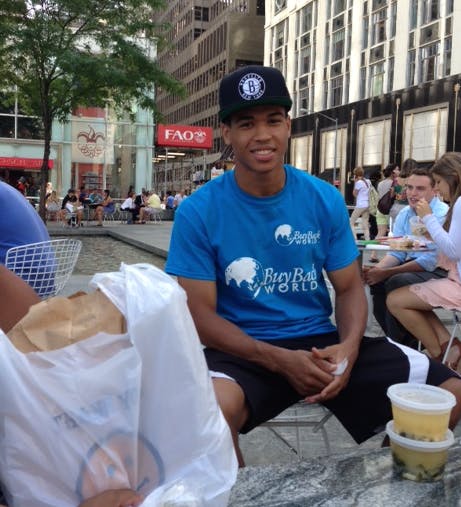 Ceballo and Cruz are wearing sky-blue shirts promoting BuyBackWorld, which buys and resells electronics. They reached out to the company earlier this year to see if they were interested in partnering up.

In exchange for the publicity, BuyBackWorld is paying for their meals and their iPhones—“like any phone we want, the highest gigabyte, anything”—in exchange for the publicity. That’s in addition to the $1,250 each they made giving up their spot in the front of the line to Moon and Joseph. Did they mind giving up the free spot? “Nah, we get food, free iPhone,” said Ceballo. “It’s a pretty good gig.”

We don’t know much about the iPhone 6, other than that it’ll reportedly have a larger screen. While it’s widely expected that Apple will release the iPhone 6 on Sept. 19 based on previous iPhone release dates, the company will neither confirm nor deny that this is the case. Best-case scenario, that’s an awful long time to wait, even for networking and PR opportunities and unlimited free Chinese takeout. We wish Ceballo, Cruz, and the Rays the best of luck.