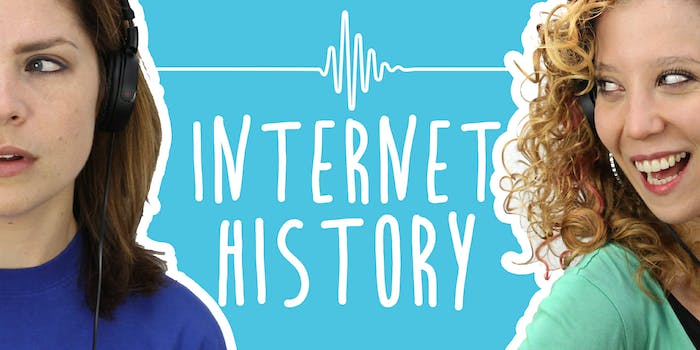 10 wild facts about the internet you didn’t know

You might be an Instagram whiz or know your way around the perilous forums of 4chan, but the internet has a long and incredible history, full of firsts, foibles, and what-ifs.

On this week’s episode of 2 GIRLS 1 PODCAST—a show that explores fascinating online subcultures—we’re taking a break from our usual interviews and challenging our intrepid hosts (Alli and Jen) to a trivia showdown. The stakes? Two glorious Trader Joe’s gift cards.

Can Alli and Jen combine their intuition and knowledge of the wild, untamed web to best this trivia beast? Listen to the episode here:

And if you’d like to play along at home in text form, we’ve shared the questions here, with answers at the very bottom. No peeking, and definitely no Googling!

But MySpace rejected the offer because Zuck was asking for too much money.

What was the offer?

In 1995, Broadcom wanted to demonstrate how powerful their T4 Ethernet technology was. At an industry conference, they successfully sent data at 100/Mbps over:

What year was the first emoticon appear in message boards?

In 2015, Swiftkey, the makers of a very popular smartphone keyboard app, analyzed 1 billion pieces of data to learn which emoji are the most popular.

According to their analysis, which country uses the poop emoji more than any other?

What is the name of Snapchat’s adorable ghost mascot?

How much did Activision pay for King Games, the makers of Candy Crush, in 2015?

What is the best-selling video game of all time, by units sold?

What band was the first major-label artist to release a single directly onto Napster before it was available in stores, in 2001?

Why did Vanna White sue Samsung in 1993?

Find out how many you got right. And how did you fare against our hosts?

“One of the most interesting stories, however, is a report that MySpace could have acquired Facebook for just $75 million in early 2004, but passed on the deal as too expensive.”

They were trying to prove that their tech would work, even on outdated wiring infrastructure. The message they sent over the wire was “Buy Our Parts.”

The earliest known e-use of an emoticon traces back to a message board post made by user Scott E. Fahlman:

I propose that the following character sequence for joke markers: :-)
Read it sideways.
Actually, it is probably more economical to mark things that are NOT jokes, given current trends.  For this, use :-(

According to Swiftkey, French love to use heart emoji. Arabic speakers use flowers and plants 4x more than average. Australia uses a lot of indulgence-themed emoji — alcohol, drugs, and junk food. Americans are kind of random: Chicken legs, eggplant, skulls, and “feminine” emojis like lipstick and pink bows.

“In January 2001, Dave Matthews Band made history by becoming the first major artist to release a single directly to Napster, posting “I Did It” on the controversial file-swapping service 6 weeks before the new album was officially released.”

“In 1993, White sued the Samsung Electronics corporation over its use of a humorous ad featuring a robot turning letters on a game show, alleging a violation of her personality rights. The lower court’s decision in Samsung’s favor was reversed by the United States Court of Appeals for the Ninth Circuit, and the Ninth Circuit denied a rehearing; Judge Kozinski issued a dissent. The U.S. Supreme Court denied certiorari. White ultimately was awarded $403,000 in damages.”

2 Girls 1 Podcast is supported by listeners. A lot of time and resources go into research, booking, editing, and publishing this show. If you love internet culture as much as we love ‘casting about it, consider a contribution of $1 or $2 per month to help offset our production costs. Become a patron of #2G1P and earn some cool perks while you’re at it:

2 Girls 1 Podcast is hosted by Allison Goldberg and Jennifer Jamula and is produced and edited by Matt Silverman in New York City. Production assistance is provided by the Podglomerate.

Update 3:50pm, Aug. 9, 2019: Thanks to an eagle-eyed reader, we’ve adjusted question 4 (and its corresponding answer) to be more accurate.