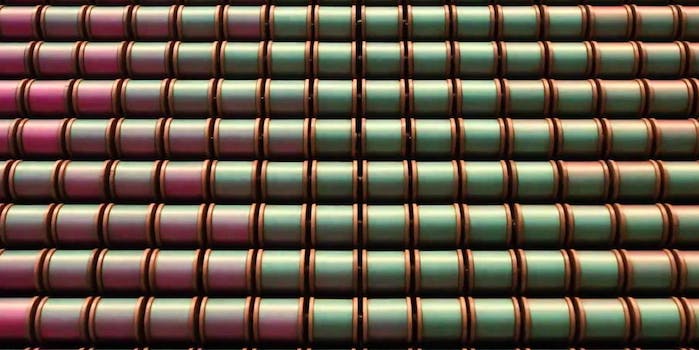 Photos that no IG filter can create.

Just as Instagram is cranking its photos up to high resolution, Forever 21 is turning it back down on its new screen. But on this display, it’s not the pixel count that matters—it’s the thread count.

Meet the Forever 21 Thread Screen, a display entirely unlike the smartphone screen you’re used to seeing your photos on—unless your phone is a 2,000-pound machine consisting of 6,400 spools of thread.

The incredibly intricate machine will be up and running for the next week, displaying images from Instagram tagged with #F21ThreadScreen.

Created by New York City-based Breakfast, a rapid product and prototype company, the Thread Screen takes the digital images from Instagram and turns them into a physical photo displayed in thread.

Every image snapped and tagged with the #F21ThreadScreen hashtag gets caught by a server, which queues up the images. “To prepare an Instagram for the screen, it’s downsized to 80 x 80 pixels and its colors are remapped to fit the 36 color palette of our thread,” Andrew Zolty, co-founder and chief creative officer of Breakfast, told the Daily Dot. “The color remapping process uses an algorithm that measures the distance between two colors in terms of human-eye perception.”

Once the image is broken down and processed, the system can start recreating it with the thousands of spools of material.

“From there, we break the image down into 32 x 4 chunks—due to the way the hardware is laid out—and send out all the information to all 200 modules that make up the screen. The information sent to the modules includes coordinates and timing information (for transitions), then finally we send one command off to all the modules to tell them to start moving,” Zolty explained.

The entire process is broadcast via livestream as the machine works without stop between July 22 and July 28, converting pixels to thread. Each photo conversion will also be spun off into its own standalone video so Instagram users will be able to search and find their images by account name.

It’s a project a year and a half in the making.

“Forever 21 was looking to experiment with something quite different than what they’ve done in the past,” Zotly said. “They gave us a rather open brief, and from the start we knew we wanted to build a Web-connected experience that anyone could try from anywhere in the world.”

After getting the go-ahead to make the screen a reality, Zolty and his team at Breakfast got to work building what would eventually become the Thread Screen. Two-hundred-thousand parts make up the massive display, including hundreds of custom-made modules—and that’s just in the final product.

“We prototyped various fabrics, with various printing techniques, with various elastics to achieve certain tensions. We built test rigs to see how the fabric would hold up over time,” Zolty said.

There were plenty of challenges throughout the process as the Breakfast crew built the massive display. Inconsistency with parts created unexpected challenges, as did maintaining the integrity of parts as the environment changed around them. Heat would cause parts to change shape and fabric to lose tension, requiring alterations in the design.

Static electricity also proved to be a major hurdle. In an early build, a single, 36-spool module produced more than 20,000 volts of static electricity. “That static would run through the motors, the motor leads, then back to the PCB (circuit board) and often cause it to catch fire,” Zolty explained. “We had to reengineer how we grounded the entire screen, and now it has three redundant systems to ensure all static is dissipated.”

Zolty said the screen is being “constantly monitored by the system and engineers to ensure everything is kept optimal.”

The week-long experiment in weaving photos may not be the lone use for the Thread Screen. Zolty said the display is designed to be moved and may have life after Forever 21.

“After running 24 hours a day over a week, we’ll have a chat about what/if there’s a next move,” he said.

For now, though, it’s spinning as fast as it can in Breakfast’s New York offices, weaving a thread between low- and high-tech to create a look for photos that no Instagram filter can create.