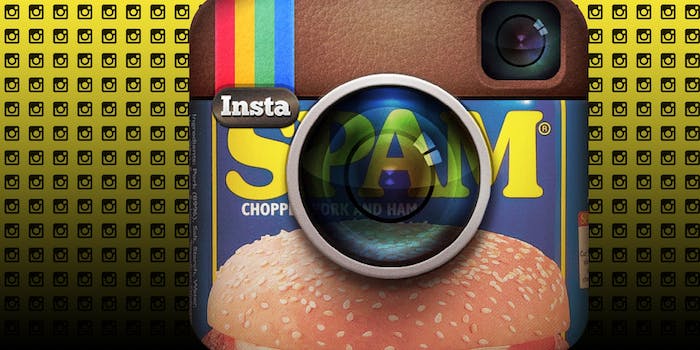 If you lose some Instagram followers this week, take comfort knowing they were likely spambots.

Instagram is finally cracking down on its spam problem.

Some Instagram users have received a pop-up notification warning users that they may see their follower count drop, since the company is sweeping the service for inactive and spam accounts.

“After receiving feedback from members in the Instagram community, we recently fixed an issue that incorrectly included inactive accounts in follower/following lists,” an Instagram spokesman said in a statement. “We believe this will provide a more authentic experience and genuinely reflect people who are actually engaging with each other’s content.”

Instagram doesn’t dealt with the volume of fake accounts that Twitter hustles to cull, but the photo-sharing app has plenty of phony, spammy accounts. For casual users, these accounts might not pop up in your feed. Look at the comments sections of popular photos though, and you’re pretty much guaranteed to see a few dubious-looking messages hawking products. And people who want more Instagram followers have propped up a shady cottage industry of follower-sellers.

Some users are reporting that they continue to see spam accounts adding them, despite the purge.

There’s @instagram telling me they got rid of spam accounts and then look at my two newest spammy followers! pic.twitter.com/xf2YvCEdks

This isn’t the service’s first attempt to spring-clean spam. In 2012, it banned users who posted URLs in comments in an effort to crack down on self-promotional behavior.