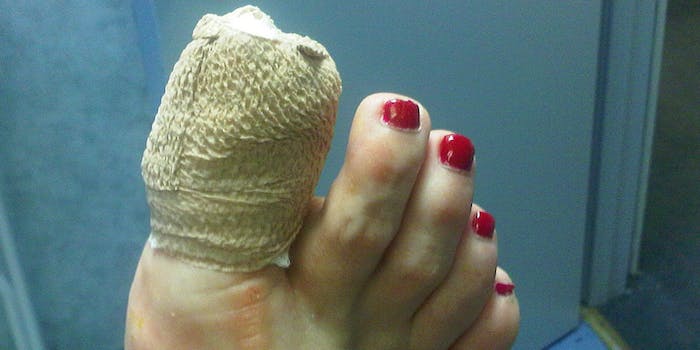 Toenail removal app is your one-way ticket to Vomitville!

Is “Ingrown Toenail Removal” the nastiest app for iPhone? Why yes, yes, it is.

Remember the game “Operation” with its grating buzzer and those little tweezers you used to pick plastic organs out of a man laid out on a board game operating table? If you’re nostalgic for Operation but wish it was digital, more specific, and more disgusting, you’re in luck: There’s a virtual surgery iOS app called Ingrown Toenail Removal and it’s exactly what it sounds like.

Ingrown Toenail Removal, which claims to be ranked #1 as an educational game in two countries, lets players simulate what it’s like to remove ingrown toenails. This could be helpful in a pinch, although it seems like a bad idea for people to be giving themselves anesthetic injections and cutting their toenails off without consulting medical professionals. It starts off gross, which is a bold move. Dr. Jeff’s wire rims and pleasant demeanor can’t amend for the horror we’re about to experience. Wait, do people keep iodine on hand in their homes now? This is the grossest app ever, and one can only imagine what the sadists in charge have in store next… a hemorrhoid repair simulator? A virtual colonoscopy adventure game? Something involving digital varicose vein de-bloating?