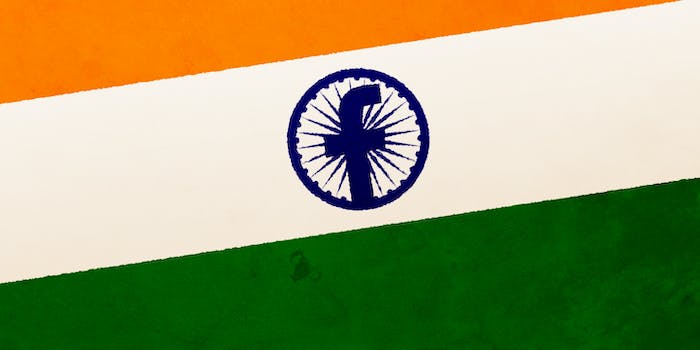 The decision could have ripple effects as other companies try similar programs.

The Indian government on Monday took aim at Facebook and other companies offering free access to their services in a way that it said undermined the open Internet.

The Telecom Regulatory Authority of India (TRAI) declared in a ruling that Internet service providers could not “offer or charge discriminatory tariffs for data services on the basis of content.”

The rule effectively bans Free Basics, a Facebook program that offered Indians free access to a scaled-down version of the social network. Open-Internet advocates had argued that, by encouraging the cost-free use of its platform, Facebook was making it harder for smaller companies—which cannot offer similar deals—to reach as many people, thus undermining net neutrality.

“I think the first piece of the domino has fallen in the world’s largest democracy.”

“The publication of these rules demonstrates the sharpening global consensus on preventing network discrimination and protecting the open Internet,” Chima said, “which is critical to realizing our rights to free expression and access to information.”

Free Basics follows a model known as “zero-rating,” which refers to the policy of “rating” data used while accessing certain services as “zero” for billing purposes. Internet service providers that offer access to zero-rated services effectively encourage their subscribers to use those programs more than others.

Only about 31 percent of India’s 1.3 billion people have Internet access, according to estimates by an industry group. Around 306 million of those 402 million people exclusively or primarily browse the Web from smartphones. Facebook’s plan to expand its service across the globe is increasingly reliant on such mobile users.

Vishal Misra, a professor of computer science at Columbia University, stressed that the ruling was much bigger than Free Basics, which only one Indian ISP had been offering. Other ISPs, he said, have been eying a Free Basics-like differential-pricing approach for years.

“Differential pricing gives them a lot more power to monetize their customers,” Misra said in an interview. He predicted that the service providers, not Facebook, would appeal TRAI’s ruling.

A Facebook spokesman did not respond to an email asking whether the company planned to appeal, but in a statement to Reuters, a company spokesperson said that it would “continue our efforts to eliminate barriers and give the unconnected an easier path to the Internet and the opportunities it brings.”

Misra, who criticized differential pricing, pointed to the behavior of Reliance Communications, the Indian ISP that had partnered with Facebook, as evidence of the model’s anti-consumer impact.

“They were targeting people who already had Internet,” he said. “They were looking at it as a customer-acquisition tactic.” This ran contrary to Facebook’s stated goal of bringing more people online using its service as a gateway.

“Facebook’s role in this was not clear from the beginning,” Misra said, “and I think they’ve realized that.”

TRAI put Facebook Free Basics on hold in December pending a final ruling on its service model, soliciting comments from supporters and opponents of the program in January. “The regulator ran a very open and transparent process and sought public feedback,” Misra said. “Millions of individuals responded, and the regulators carefully considered the different opinions coming in.”

The question now is whether other national telecom regulators will follow India’s lead and crack down on zero-rating. The FCC has moved tentatively to address criticisms of T-Mobile’s Binge On and similar wireless programs, fearing a backlash from business groups and the Republican-led Congress.

“I think the first piece of the domino has fallen in the world’s largest democracy,” Misra said. “Regulators around the world will sit up and take notice.”