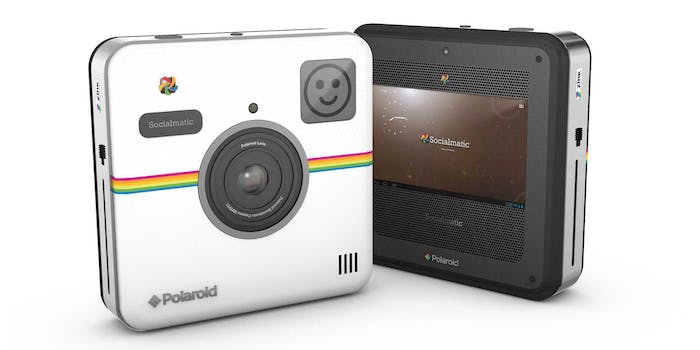 When the concept for the Socialmatic, a camera combining the nostalgia of the vintage instant Polaroid with the social sharing features of Instagram, made the Internet rounds in 2012, it was met with ample skepticism. Some wondered if the sleek design and retro-meets-modern concept, while cool, were enough to offset the Socialmatic’s estimated $300 price tag.

Despite these concerns Polaroid forged ahead with the product, and announced it was in the process of developing the Socialmatic last February. Now, the real-life Instagram camera is one step closer to becoming a reality: Polaroid just announced that the Socialmatic will hit shelves this fall.

According to the Socialmatic’s website, the camera will combine Wi-Fi and Bluetooth technology with the romantic appeal of an instant Polaroid camera, allowing you to print out your photos IRL while simultaneously sharing them on Facebook, Twitter, and (of course) Instagram.

Design-wise, the Socialmatic is basically a real-life replica of the iconic Instagram logo. With its trademark boxy shape and slender rainbow running through the middle, the camera looks like something you’d find in your granddad’s basement: it’s clunky, retro, and, it must be said, looks very, very cool.

In addition to its 4.5-inch touchscreen LCD, built-in Wi-Fi, and 4 GB built-in storage, the camera has two sensors: a 14 megapixel one in the front, and a 2 megapixel in the back (presumably for naked selfies). It should be noted that these specs are a big bump-up from what your iPhone is capable of, specifically the front-facing camera. That VGA camera on your phone is what’s to blame for all those grainy selfies.

The printout photos will also feature a QR code in the corner so other Socialmatic users can scan and reprint the photos, a feature that’s already garnered some criticism from tech bloggers. It means that people can piggyback on your Instagrams… though plenty of printing services already let us do this, so the concern isn’t a new one.

Apart from its printing capacity, the Socialmatic is fairly similar to most smartphone photo-sharing apps, so it’s unclear whether the item’s nostalgia value will be enough to appeal to consumers. Still, it’s an interesting concept, one that, if successful, may spawn a slew of future products that combine old-world aesthetic appeal with new-world technology.