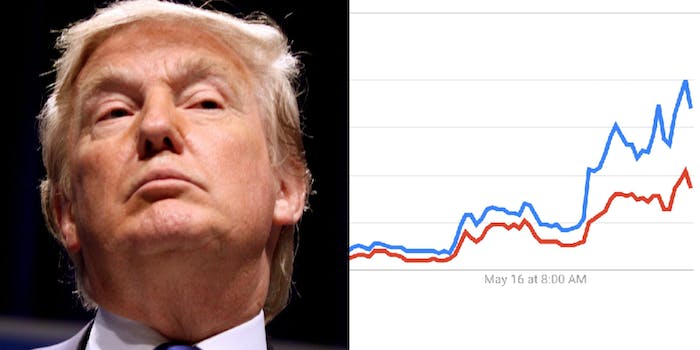 More Americans are curious about the impeachment of President Donald Trump than at any point since his inauguration.

Want to know what Americans are thinking about? Look no further than Google.

Amid a disastrous week for President Donald Trump, Google searches for “impeachment” have skyrocketed as scandal after scandal bombards the White House and the American psyche.

Over the past seven days, an increasing number of people in the U.S. are searching “impeachment” and “impeach Trump,” as well as other related terms, according to Google Trends data. Popularity of the terms is at the highest level since Trump took office on Jan. 20.

Google users in Washington, D.C., are searching “impeachment” more than people in any other region. Users in Vermont, Massachusetts, and New Hampshire follow closely behind.

Increased curiosity about “impeachment” is not without reason. The past week and a half has seen Trump fire FBI Director James Comey, who was leading an investigation into Trump associates ties to Russia, which the president said was part of his reasoning for ousting him; reports that Trump shared highly classified intelligence with Russian officials; and the revelation of Comey memos that reportedly show Trump attempted to influence the FBI’s investigation into former National Security Adviser Michael Flynn‘s ties to Russia.

The firing of Comey and reports of the Comey memo have Democratic and Republican lawmakers considering the possibility that impeaching Trump may be necessary, particularly if the Comey memo shows that the president engaged in obstruction of justice.

The current conversation around impeachment has raised the odds that Trump will be impeached on prediction markets, where users bet on different outcomes. On betting market Predictit, the chances of Trump facing impeachment have risen to 21 percent, a seven-point jump over the past week.

A president cannot be charged with crimes before he or she is impeached. In order for Trump to be impeached, a majority of lawmakers in the House of Representatives would need to vote to authorize impeachment proceedings. The Senate would then conduct an investigation into the allegations. A two-thirds vote in the Senate (67 senators) is required to convict a president.

Republicans currently control both Houses of Congress, and they have shown heavy reluctance to condemn Trump’s actions let alone impeach him.

Only two presidents in U.S. history have been impeached: Andrew Johnson and Bill Clinton, both of whom the Senate acquitted.