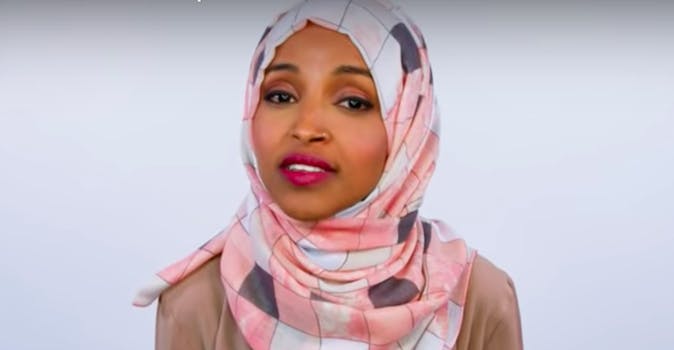 The incident sparked violence and a resignation.

A poster linking Rep. Ilhan Omar (D-Minn.) to the attacks on the World Trade Center on September 11, 2001, caused uproar in the West Virginia House of Delegates on Friday.

The poster, which superimposed a photo of Rep. Omar over the World Trade Center in flames, was part of a display for a day celebrating the GOP at West Virginia’s state house. The text read, “‘Never forget,’ — You said,” and “I am the proof —you have forgotten” over the picture of Rep. Omar.

“I feel just as horrible about that as you could ever imagine,” Del. Caputo told West Virginia’s WSAZ3.

The West Virginia Republican Party issued a statement on Saturday rebuking the poster.

Robert McCaw, the Director of Government Affairs at the Council on American-Islamic Relations (CAIR) told the Daily Dot, “It’s one thing for the West Virginia Republican party to claim it does not endorse hate speech. It’s another thing to rebuke Islamophobia and apologize to Rep. Omar.”

“It broadly denounces all forms of hatred. It doesn’t have the courage to call out the Islamophobia that’s rising in the ranks of the Republican party,” McCaw continued.

Rep. Omar commented on the incident on Twitter on Friday.

“No wonder why I am on the ‘Hitlist’ of a domestic terrorist and ‘Assassinate Ilhan Omar’ is written on my local gas stations. Look no further, the GOP’s anti-Muslim display likening me to a terrorist rocks in state capitols and no one is condemning them,” referring to a February incident in which a white supremacist Coast Guard lieutenant stockpiled weapons and had Omar’s name on a hit list.

No wonder why I am on the “Hitlist” of a domestic terrorist and “Assassinate Ilhan Omar” is written on my local gas stations.

Look no further, the GOP's anti-Muslim display likening me to a terrorist rocks in state capitols and no one is condemning them! https://t.co/0ouCaloWqh

Rep. Omar’s office did not respond to a request for further comment by press time.

Speaker of the House Roger Hanshaw said his office would investigate the incident. A request for comment from Hanshaw’s office was not returned by press time.

However, according to NPR, a woman wearing a shirt bearing the ACT for America logo claimed responsibility for the poster.

Today at @WVGOP day, a vendor displayed a sign promoting HATE towards Muslim Americans. Here’s what she had to say… #wvpol pic.twitter.com/ph2bWJAvuf

“ACT for America is a designated member of the U.S. Islamophobia and its mission is to promote toxic beliefs about Muslim American citizens,” said McCaw.

Some of Omar’s colleagues in Congress have come to her defense, including Rep. Ayanna Pressley (D-Mass.), and Rep. Alexandria Ocasio-Cortez (D-N.Y.)

The inhumane racism and death threats thrown at my friend Rep. @Ilhan are acts of terrorism. Period. We will overcome these threats to our humanity just like we've done time & time again. We are resilient. Ilhan – we got your back. https://t.co/IVOeFATIdw

When racism becomes acceptable on a partisan basis, and official GOP groups begin to use it to demonize communities, it puts real people in danger.@IlhanMN, I am sorry these threats are being targeted on you.

Praying for your safety. https://t.co/G6tCVHOEfS