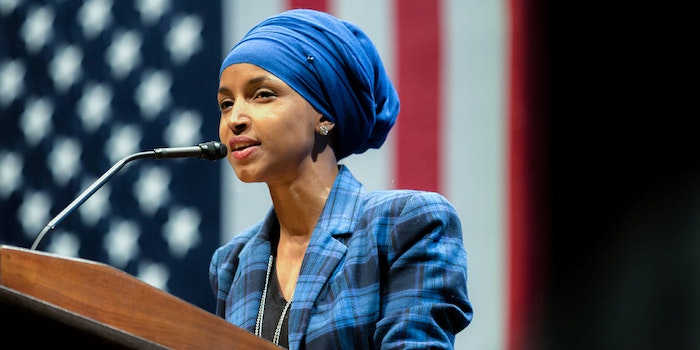 Omar dismissed the allegations as 'baseless rumors' in 2016.

One of the largest newspapers in Minnesota waded into a long-standing far-right belief that Rep. Ilhan Omar (D-Minn.) married her brother to facilitate his immigration to the U.S.

An article published Saturday night by the Star Tribune reopens a narrative that Omar dismissed as “baseless rumors” in 2016 during her campaign for the Minnesota House. The rumors allege that Omar married Ahmed Nur Said Elmi, who some claim is her brother, as a shortcut for him to navigate immigration laws.

But the conspiracy is not without holes. Here’s what we know.

A state probe of campaign finance violations showed that Omar filed joint federal taxes in both 2014 and 2015 with her current husband Ahmed Hirsi, while still being legally married to Ahmed Nur Said Elmi.

The investigations were conducted in order to find if Omar had inappropriately used campaign funds to pay a lawyer to rectify these tax filing issues.

Omar was fined $500 as a result of the investigation. Throughout her time in public life, Omar has attempted to minimize press coverage of her personal life—including her marriage to Elmi—on the grounds of maintaining her privacy.

“Since before she was elected to office, Ilhan has been the subject of conspiracy theories and false accusations about her personal life,” wrote spokesman Jeremy Slevin in a statement regarding the rumors. “Legitimate media outlets have a responsibility not to fan the flames of hate. Continuing to do so is not only demeaning to Ilhan, but to her entire family,” he added, explaining why Omar tried to not respond to inquires about the matter.

The Star Tribune’s coverage of the conspiracy theory includes a brief history of Omar’s life and marriage history.

When Omar legally married Elmi in 2009, she identified him as a British citizen. Records surrounding Elmi’s immigration status at this time were not discovered by the Star Tribune.

Omar and Hirsi reconciled in 2012 but did not remarry legally until 2018. During this time, they filed joint tax returns while Omar was still legally married to Elmi. According to the article, the Star Tribune “searched public records—including available databases, the marriage and divorce filing, business licenses, university records and other documents—and could find little publicly available information about Elmi.”

The article concludes that “the search of records could neither conclusively confirm nor rebut the allegation that [Elmi] is Omar’s sibling.”

The article cites a variety of materials posted onto conservative media websites that “could not be verified by the Star Tribune” to justify their inclusion of these rumors in their publication. The rumors themselves first sprang up in 2016 on Somalispot.com, an online Somali culture forum, near the time of Omar’s campaign.

It also states that in 2016, Omar’s campaign provided the first but not last names of her six siblings to the Star Tribune. The provided names were only first names to protect her family’s privacy and did not include Elmi. In October, Omar also showed a Star Tribune reporter photos of her family’s immigration papers but did not directly provide the actual documents.

Despite the fact that any investigations the Star Tribune conducted returned inconclusive information regarding the validity of the rumors surrounding Omar, they are front and center in the article.

Indeed, the entire piece focuses on rumors that conservative bloggers and conspiracy theorists have had field days with in order to criticize the progressive representative.

But while the conspiracy revolves around Omar marrying Elmi in order for him to supposedly sidestep immigration laws, none of the outlets or theorists pushing this narrative have presented proof that Elmi applied for citizenship or a green card during the time he was legally married to Rep. Omar. Elmi isn’t even in the United States right now.

This conspiracy theory claiming Omar married her brother was also one of the main subjects during an impromptu presser by Jacob Wohl and Laura Loomer during this year’s Conservative Political Action Conference (CPAC).

Loomer and Wohl hosted an event in the lobby of the Gaylord Hotel.

A lot going on at this Jacob Wohl/CPAC press conference…

–@willsommer asks about the Mueller claims, Wohl says it's over, crowd erupts in laughter

–@willmenaker trolling from the crowd

-Laura Loomer demanding her and Jacob get their twitter accts backhttps://t.co/SvPrmvyfYN

The event was in advance of a documentary Loomer and Wohl filmed Omar to prove she married her brother, called Importing Ilhan.

While the Star Tribune didn’t reach a conclusion in its article, even covering it was enough for conservatives to claim a victory.

Her comments can be found on Telegram https://t.co/gbLDNo72W8

Others claimed the Star Tribune willfully ignored evidence in publishing its piece.

The @StarTribune ran a dishonest, cowardly piece of journalism tonight.

For 3 years, the paper ignored the work of reporters Preya Samsundar, Scott Johnson, and myself on @ilhanMN’s disturbing past. Ignored our emails offering new evidence. (1x)

Additionally, their article failed to confirm, or even mention, far more of our work, despite us being able to confirm all that we published.

Please read our work, not theirs — all of our articles are linked in this thread: https://t.co/IAM0AbUIJi (4/x)

In the end, all this story will do is provide more fuel to the conspiracy fire.