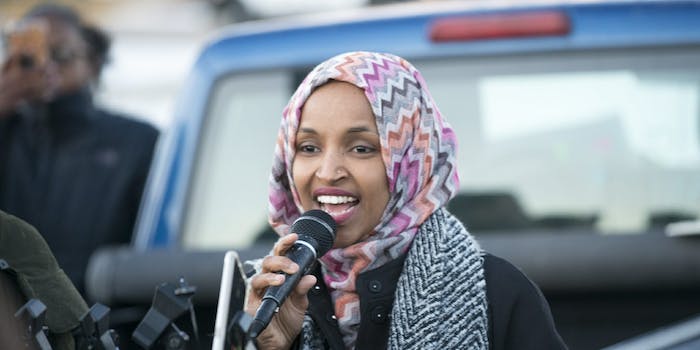 Conservatives became angry that Rep. Ilhan Omar did not acknowledge the religious significance as a Christian place of worship in her tweet.

Rep. Ilhan Omar (D-Minn.) was subject to vitriol on Monday in response to tweeting her condolences following the fire that engulfed Paris’ Notre Dame Cathedral.

The lawmaker posted that she was “praying” for those trying to save the building at reflected on “art and architecture” as a unifying force.

Art and architecture have a unique ability to help us connect across our differences and bring people together in important ways. Thinking of the people of Paris and praying for every first responder trying to save this wonder.

Many conservatives became angry that Omar did not acknowledge the cathedral’s name or its religious significance as a Christian place of worship in her tweet.

Well, the “architecture” that the art was housed in is a cathedral. While Biblically Christ is wherever His people are, Notre Dame is a significant and storied icon of faith. https://t.co/bsckz26qHe

"Art and architecture"?! Is that all the Notre Dame Cathedral is in your mind?

Amazing you found a way to phrase this without saying “Notre Dame,” “cathedral,” or “church.”

The outrage builds on the conservative response to comments made by the Muslim lawmaker during a speech to the Council on American-Islamic Relations (CAIR) about the 9/11 terror attacks that some perceived as insensitive—a note that “some people did something.”

In response to Omar’s Notre Dame tweet, many made joking parallel reference to the 9/11 remarks.

Someone did something somewhere in France

Some art and architecture “burned or something” and that is bad.

For some on the right, however, the criticism escalated to attacks on the lawmaker which drew links between her Muslim faith and even, in one case, the actions of Islamist terror group ISIS.

A Christian Church burns and she is concerned about art and architecture. I wonder if that would be her take if Mecca burned. https://t.co/PmiASpqt94

Some liberals were quick to respond in the Minnesota lawmaker’s defense, acknowledging there’s little she can do right when some on the right appear to lie in wait for her to make a slip.

Ilhan: “I had toast for breakfast.”
Ridiculous Right: “omfg she is totally disrespecting breakfast as the most important meal of the day this is a clear attack on everything America stands for she should be deported back to Somalia where they hate breakfast!”

This is crazy. Ilhan Omar wrote a sympathetic tweet about Notre Dame and, in response, got compared to ISIS. 1,800 retweets. https://t.co/LatunToKka

Omar has always been a target for those on the right, as a Democrat, but what motivates this narrative comes across a little more sinister, a kind of cumulative evidencing of the manufactured notion that because of her faith the lawmaker holds active “contempt” for Western values and other faiths.

And it has no end in sight.