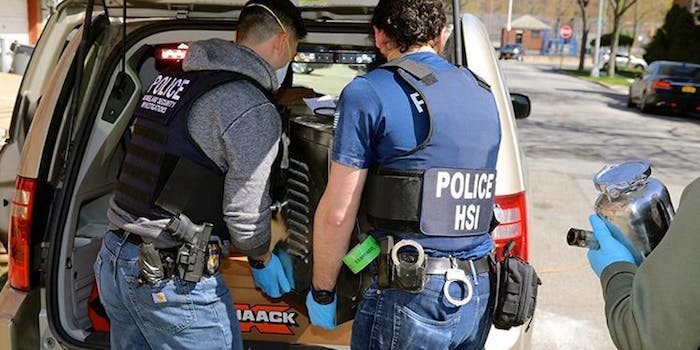 Report: ICE altered its risk assessment software to put all immigrants in detention

This risk assessment software, first implemented in 2013, uses a variety of stats to decide whether an immigrant is dangerous or not.

ICE booked more than 43,000 immigrants with no criminal history into its detention centers in 2017—three times more than the number detained in years prior. The shocking leap in immigrant incarceration isn’t due to an influx of immigrants, but rather due to a purposeful alteration in the way ICE’s risk assessment software works.

Reuters reports that in order to conform to Trump’s immigration policies, ICE altered the program it uses to determine whether immigrants should be detained, or released on bond. This risk assessment software, first implemented in 2013, uses a variety of stats to decide whether an immigrant is dangerous or not.

Previously, the tool automatically recommended either “detain” or “release.” Last year, ICE spokesman Bourke said, the agency removed the “release” recommendation, but he noted that ICE personnel can override it.

The risk assessment software works based on an arduous 178-question interview process, the answers to which must be reviewed twice before a decision is made to detain or not.

“The risk classification assessment removed the release option, but the RCA can still make recommendations on bond eligibility, and may recommend that an ICE deportation officer make a final decision on whether to detain an alien or release the individual in some capacity,” ICE spokesperson Matthew Bourke told Motherboard via email. “Final custody decisions are always made by ICE deportation officers.”

If anything, this explanation makes the situation worse. Ultimately it’s up to the ICE deportation officer to decide whether to detain someone or not. In 2014, officers only overrode the software’s decision in 7.6 percent of cases—but back then, the software only detained someone if they had a serious criminal history. According to ICE data examined by Reuters, the most serious crime detainees had committed during the first 100 days of the Trump administration: traffic violations. (Things like speeding or running a stop sign—not drunk driving.)

Detained immigrants are typically held for 44 days before they get a trial, and it costs ICE approximately $133 per day to hold these non-criminal immigrants in detention each day. In its 2019 budget proposal, ICE has actually requested funding for alternatives to detention due to limited bed space available.

It’s possible that ICE employees had no idea that the risk assessment software functionality had been changed. If that’s the case, hopefully, now that it’s been brought to light, deportation officers will consider overriding the software’s conclusions more often.