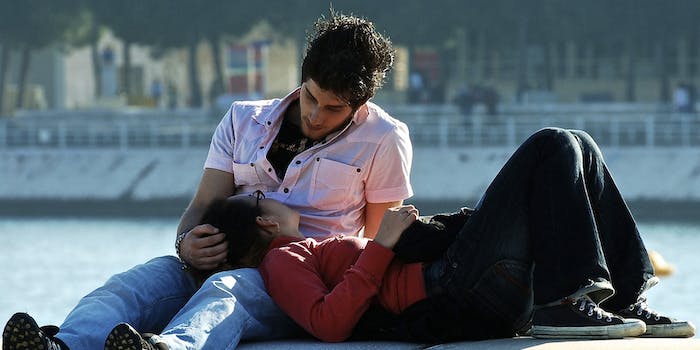 HuMOVE is a wearable that tracks your sexual performance

This wearable will tell you if you're a Marathon Man or a Quick Draw McGraw, and for something better than bragging rights.

If you’re an anal-retentive type who enjoys quantifying every aspect of your life, there’s no shortage of sex-tracking apps for you on the market. There’s Spreadsheets, the app that measures your duration by recording your pelvic thrusts per minute. There’s Nipple, which takes a more playful approach to sexual self-quantification (and which this reporter had the honor of taking out for a test drive).

But if you don’t trust your iPhone, and want to get a better, more clinical sense of how well you’re performing between the sheets, pretty soon you might be able to use huMOVE, a wearable tracking system that analyzes how long you last in bed.

Devised by a team led by Italian engineer Gastone Ciuti and urologist Dr. Ciro Basile Fasolo, the huMOVE is essentially a credit-card-sized patch containing an accelerometer that you wear on your back to record the duration of your sexual performance. The device debuted earlier this month in a paper in the journal Urology, and has been tested in a laboratory setting on human subjects stimulating sexual intercourse.

Dr. Ciuti told the Daily Dot via Skype that despite the frequency of the condition, there are inherent obstacles to diagnosing premature ejaculation. For one thing, it’s fairly common for men to diagnose themselves with the condition, even though they might well be within normal range. (We’ll defer to the Mayo Clinic here, which defines premature ejaculation as “the inability to delay ejaculation for more than one minute after penetration.”)

Additionally, the stigma associated with sexual performance issues in our culture might prevent some men from reporting they’re experiencing it. “There are psychological barriers,” Ciuti says. “A person with this problem might be too shy to go to the doctor, so he won’t be able to evaluate if he has the condition.” Even if the patient does go to the doctor complaining about premature ejaculation, he likely doesn’t have the hard data necessary for the doctor to make an accurate diagnosis. Think about it: When was the last time you had sex and counted how many thrusts it took you to reach climax?

The huMOVE, says Ciuti, is one of the first wearable sexual trackers to provide doctors with “a quantitative, numerical evaluation” to diagnose sexual performance issues. It consists of a small “wearable monitoring intertial device,” which is placed inside a flexible, credit-card-shaped patch to be worn on the user’s back. It’s made up of a microcontroller, an accelerometer sensor, and a magnetic-based switch that turns the device on and off. A card with a magnetic stripe activates the device before sexual intercourse, which Ciuti compares to a hotel room key card. Presumably, the wearer’s sexual partner would activate the device by reaching around and “swiping” it for him.

After the huMOVE is activated, the accelerometer sensor inside the device measures the frequency of your penetrations, or how many penetrations per second are required for you to reach orgasm. (Ciuti says the accelerometer is similar to that inside your iPhone, and that theoretically, you could similarly record your acceleration if you “strapped your iPhone to your body.”) When you’ve finished, the device can either transmit your data wirelessly, or you can hand off the patch to your doctor during your next visit.

Ciuti is careful to note that for the time being, the huMOVE is just a prototype, and that in the future, he’d like to make it smaller and less visible. He’d also like to build the device so it can provide autofeedback for the user, such as beeping or vibrating if the user is thrusting too fast, or if he’s “quite close to have an orgasm” based on previous performances.

He also notes that the device was developed exclusively for a clinical, diagnostic setting, so doctors can diagnose the condition and prescribe the right drugs to patients who suffer from it, such as SSRIs or drugs that treat erectile dysfunction. But he admits that in the future, the huMOVE could be used in other, non-clinical settings as well, provided there are a few “modifications in software.”

“It’s a very open system and it’s a starting point of a study,” he says. “Now it’s a diagnostic system, but in the future we can use this data with different data from other sources.”

Whether men will actually use a device like the huMOVE to measure their sexual performance times and see if they’re a Marathon Man or a Quick Draw McGraw is a different story. But thanks to this type of technology pioneered by the huMOVE, it’s now possible to use wearables to track our sex lives, the same way we use them to track our caloric intake, exercise habits, or even work output. Sex is a difficult thing to quantify, and there are philosophical questions about the benefit. But surely for some, the awkwardness would be worth it, and this certainly appears to only be the beginning for what huMOVE’s technology is capable of.