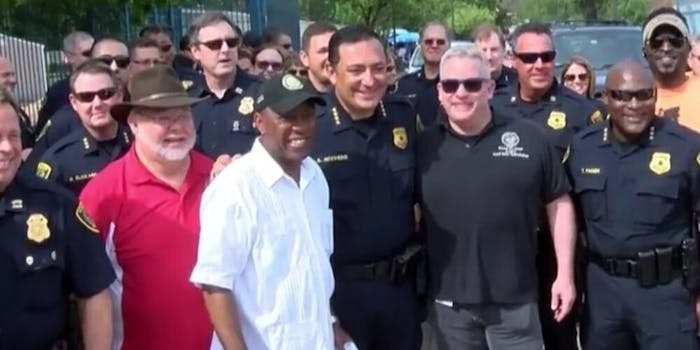 Art Acevedo is the Houston police chief, and in the past several months, he and his force have been busy, helping keep his city safe for New Year’s and wading through the destruction caused by Hurricane Harvey.

On Friday, Acevedo was involved in helping out with the Santa Fe shooting, and after a long day, he posted a Facebook message saying he would unfriend anybody if they expressed their pro-gun views to him.

Wrote Acevedo: “I know some have strong feelings about gun rights but I want you to know I’ve hit rock bottom and I am not interested in your views as it pertains to this issue. Please do not post anything about guns aren’t the problem and there’s little we can do. My feelings won’t be hurt if you de-friend me and I hope yours won’t be if you decide to post about your views and I de-friend you.”

In the aftermath of the shooting, which killed 10 students at Santa Fe High School, a number of Texas politicians—including pro-gun Republicans like Gov. Greg Abbott and Sen. Ted Cruz—arrived at the school to talk to reporters and stand in front of cameras to say that something has to change.

Texas Lt. Gov. Dan Patrick, meanwhile, surmised that Texas schools should get rid of so many entrance and exit doors, saying, “We have to look at the design of our schools moving forward and retrofitting schools that are already built. There are too many entrances and too many exits to our over 8,000 campuses in Texas. There aren’t enough people to put a guard at every entrance and exit. Maybe we need to look at limiting the entrance and exits into our schools so that we can have law enforcement looking at the people coming in through one or two entrances.”

That possible plan left the internet seething, and it seems likely that Acevedo would disagree with the anti-gun control Patrick, as well. At the very least, Acevedo almost surely wouldn’t be Facebook friends with Patrick either.