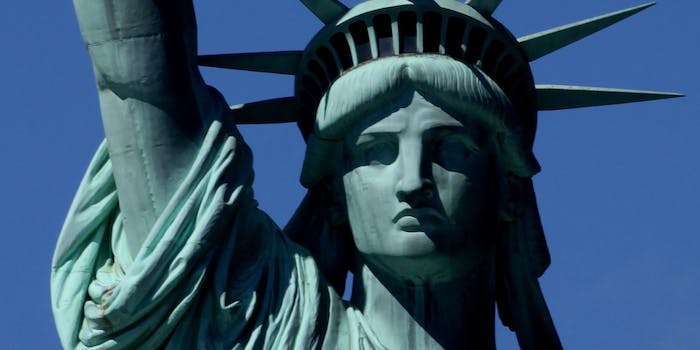 Whether the bill can pass the Senate, though, is far from clear.

In a move rarely seen since the Sept. 11, 2001, terrorists attacks, members of Congress have voted to reduce government surveillance powers.

The House of Representatives on Wednesday passed a bill to extend and reform controversial provisions of an expiring surveillance law, lending bipartisan support to a compromise bill even as criticism from across the political spectrum cast doubt on its fate in the Senate.

The House voted 388-88 to pass the USA Freedom Act, which modifies the USA Patriot Act of 2001 to curtail the National Security Agency’s surveillance capabilities. The bill ends the NSA‘s bulk telephone records program under Section 215 of the Patriot Act and prohibits warrantless bulk collection of other records. Section 215 and other provisions of the Patriot Act are set to expire altogether on June 1.

If the USA Freedom Act becomes law, government will be required to specify an individual person, device, or IP address when requesting phone metadata and other records from the NSA’s database. The same requirement will apply when the government issues secret National Security Letters (NSLs) to companies demanding their customers’ data.

The bill also authorizes the Foreign Intelligence Surveillance Court (FISC), which oversees the NSA’s programs, to appoint a privacy advocate to represent the civil-liberties perspective as the court is considering government surveillance requests.

“The American people have told Congress loud and clear that we need to rein in our nation’s surveillance programs, and today the House of Representatives listened to them by passing the USA Freedom Act,” the four representatives said. “This strong, bipartisan bill contains the most sweeping set of reforms to government surveillance practices in nearly 40 years.”

“The USA Freedom Act ends bulk collection once and for all, enhances civil-liberties protections, increases transparency for both American businesses and the government, and provides national-security officials targeted tools to keep America safe,” the statement continued.

The USA Freedom Act sits at the center of a heated debate over surveillance reform, with pro-surveillance lawmakers opposing any reforms and civil-liberties groups pushing for improvements to the compromise bill. In the Senate, Majority Leader Mitch McConnell (R-Ky.) introduced a bill reauthorizing the Patriot Act without any reforms. In the House, Reps. Zoe Lofgren (D-Calif.), Thomas Massie (R-Ky.), and Ted Poe (R-Texas) introduced the End Warrantless Surveillance of Americans Act to address the USA Freedom Act’s shortcomings.

Dozens of senators attended a Tuesday afternoon briefing on the Patriot Act with senior administration officials, including FBI Director James Comey and NSA Director Adm. Michael Rogers, but it’s still unclear how the upper chamber will address the expiring provisions in the two weeks that remain before the deadline.

Sen. Patrick Leahy (D-Vt.), who co-sponsored the Senate’s version of the USA Freedom Act, said, “The overwhelming vote in the House should send a strong signal to Senate Republican leaders that momentum is on the side of surveillance reform.”

Sen. Ron Wyden (D-Ore.) struck a more moderate tone, praising the House for passing the bill but reiterating his push for bolder reforms.

“I am working with Senate colleagues to pass additional reforms, particularly ending the warrantless backdoor searches of Americans’ personal electronic communications under Section 702 of the Foreign Intelligence Surveillance Act,” Wyden said in a statement. “And I have made it clear I will fight any effort to extend mass surveillance of Americans’ records through a straight renewal of the Patriot Act—even a short-term one.”

Wyden’s last remark referred to McConnell’s clean reauthorization bill, which the Oregon Democrat has vowed to filibuster if it reaches the floor.

“Now is not the time to turn to an untested, unproven proposal as the House has done today,” Burr said in a statement.

The divergent approaches to surveillance legislation point to the difficulties that lie ahead for the USA Freedom Act. The Electronic Frontier Foundation pulled its support for the bill on Monday, saying that a recent appeals court ruling striking down Section 215 pointed to the need for stronger reforms.

Rep. Justin Amash (R-Mich.), a leading privacy watchdog in the House, voted against the bill because it didn’t end all forms of bulk collection of Americans’ records. And Rep. Ted Lieu (D-Calif.), whose confrontation of FBI witnesses in a May 1 committee hearing earned him widespread respect from the privacy community, similarly voted against the bill because it preserved many aspects of Section 215.

“The loopholes left in place will continue to undermine the trust of the American people,” Lieu said.

Nevertheless, a wide spectrum of tech-industry groups support the bill, from the Information Technology Industry Council—which incorporated today’s vote into its scorecard of this congressional session—to the Silicon Valley coalition Reform Government Surveillance, which includes companies like Facebook, Google, and Twitter.

The Center for Democracy & Technology praised Wednesday’s passage of the bill. CDT President and CEO Nuala O’Connor called the vote “a major win for surveillance reform and a major rebuke for those who want to reauthorize the Patriot Act without change.”

Amie Stepanovich, U.S. Policy Manager at the global civil-liberties group Access, called the bill “the vehicle for reform” but said it was “far from perfect.” She urged senators to demand that stronger provisions be added before they voted for the bill.

Kevin Bankston, policy director at New America’s Open Technology Institute, said the House vote was “an important first step toward protecting Americans’ privacy, reforming our foreign intelligence laws, and restoring the consumer trust in American tech companies that has been lost in the last two years.”

But two of the most liberal privacy groups, Demand Progress and Fight for the Future, voiced serious concerns about the bill.

“We must let Section 215 expire, rather than extend it through USA Freedom or any other vehicle,” said David Segal, Demand Progress’ executive director.

Tiffiniy Cheng, co-founder of Fight for the Future, said the USA Freedom Act would merely “extend and expand the government’s power to monitor our communications under the Patriot Act.”

The libertarian group TechFreedom used the House’s vote to rail against the McConnell clean reauthorization bill. The group’s president, Berin Szoka, said in a statement, “Senators must reject calls to reauthorize the Patriot Act without significant reform, whether that’s for a month, a year, or five years.”

The White House has signaled that President Obama will sign the USA Freedom Act if it reaches his desk. In a statement released on Tuesday, the administration said the bill “strikes an appropriate balance between significant reform and preservation of important national security tools.”

Update 5:30pm CT, May 13: Added statements from Demand Progress, Fight for the Future, and Sen. Burr.