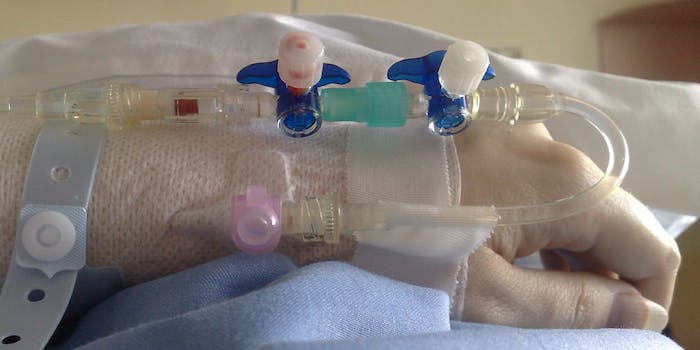 'Right now, those are the people—who've done things the right way—that are seeing their costs skyrocketing.'

A House Republican sparked outrage on Monday, commenting that healthy people who live “good lives” shouldn’t be expected to pay more because they are in the same insurance pool as sick people “who have higher health care costs.”

In an interview with CNN’s Jake Tapper, discussing the Trump administration’s revised healthcare plan, Rep. Mo Brooks (R-AL) went even further to imply that sick people were to blame for their illness in contrast to others “who’ve done things the right way.”

Brooks is a member of the fringe conservative House Freedom Caucus, a group of congressmen who were instrumental in thwarting the passage of President Donald Trump’s healthcare reform bill because, they claimed, it didn’t go far enough in repealing Obamacare. Now, however, Brooks says that he will join wider House Freedom Caucus in backing Trump’s American Healthcare Act after concessions and amendments were made in the voting bloc’s favor. One of these changes was cited by Brooks in Monday’s interview.

“My understanding is that [the new healthcare proposal] will allow insurance companies to require people who have higher health care costs to contribute more to the insurance pool … [which] helps offset all these costs, thereby reducing the cost to those people who lead good lives, they’re healthy, they’ve done the things to keep their bodies healthy,” Brooks said, a view popular among right-wing libertarians.

“Right now, those are the people—who’ve done things the right way—that are seeing their costs skyrocketing,” he continued.

Apparently realizing the cold generality of his hard-line view that all sick Americans were some sort of undeserved financial burden to the healthy who live “good lives,”  Brooks reasoned that, “in fairness, a lot of these people with pre-existing conditions, they have those conditions through no fault of their own.”

On Twitter, though, Americans were already reacting angrily to the thrust of Brooks’ uncompassionate pitch for Trumpcare.

Apparently @RepMoBrooks believes my son, who has been disabled since he moved from 1 cell to 2, deserves expensive healthcare.

Here's my irresponsible 10-year-old boy, born with cerebral palsy. @RepMoBrooks maybe you can explain to him your theory. pic.twitter.com/RYjmc9Bhm8

I've lived my entire life with asthma. I guess my question to Republicans like @RepMoBrooks would be, what did I do to deserve that?

With the Caucus’ full and official backing, Republican leaders are apparently confident that the bill will now successfully pass the House of Representatives with White House officials suggested that vote could take place sometime this week. However, passage is not assured, with moderate Republicans beginning to defect over hard-right provisions they fear their constituents will oppose.