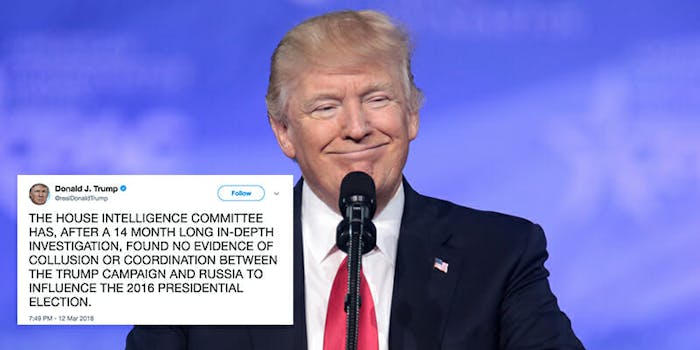 They're ending their investigation.

The House Intelligence Committee’s investigation into Russian interference during the 2016 election is coming to an end, the Republican leading the probe said Monday.

Republicans say they found no evidence of Russian collusion with the Trump campaign and disagree with a 2017 intelligence assessment that Russian President Vladimir Putin showed a “preference” for President Donald Trump during the election, the Hill reported. A draft of the committee’s findings will be sent to Democrats on Tuesday.

“We found no evidence of collusion,” Rep. Mike Conaway (R-Texas) said. “We found perhaps some bad judgment, inappropriate meetings, inappropriate judgment in taking meetings — but only Tom Clancy could take this series of inadvertent contacts, meetings, whatever, and weave that into some sort of a spy thriller that could go out there.”

Trump tweeted in celebration of the news, omitting that it was only Republicans who concluded their findings.

THE HOUSE INTELLIGENCE COMMITTEE HAS, AFTER A 14 MONTH LONG IN-DEPTH INVESTIGATION, FOUND NO EVIDENCE OF COLLUSION OR COORDINATION BETWEEN THE TRUMP CAMPAIGN AND RUSSIA TO INFLUENCE THE 2016 PRESIDENTIAL ELECTION.

The top Democrat on the committee, Rep. Adam Schiff (Calif.) blasted Republicans for ending the investigation, saying the announcement is a “tragic milestone” and “capitulation to the executive branch.”

“If the Russians do have leverage over the president of the United States, the majority has simply decided it would rather not know,” he said.