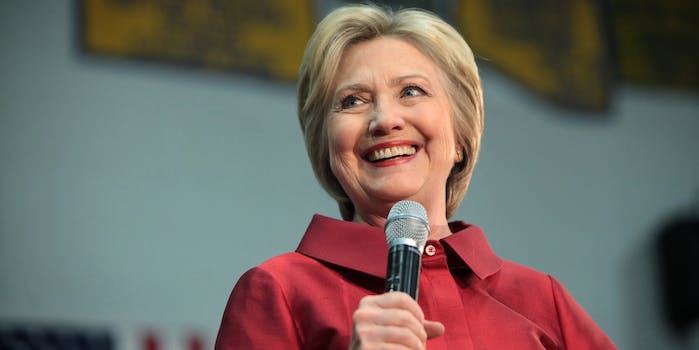 Former Secretary of State Hillary Clinton has secured the number of delegates necessary to clinch the 2016 Democratic presidential nomination, the Associated Press reported Monday night, the day before the California primary.

According to a count of the pledged delegates, as well as a “survey of party insiders known as superdelegates,” the AP has determined Clinton has topped the magic number of 2,383 delegates required to become the party’s presumptive nominee.

The AP surveyed all 714 Democratic superdelegates during the past seven months and has determined that, combined with the pledged delegates she was won from the primary votes and caucuses held across the country in recent months, Clinton has enough delegates to put her over the top.

Shortly after the AP published its story, NBC News followed suit, similarly projecting Clinton having enough delegates in her camp to become the nominee.

Still widely believed to be just short of the 2,383 delegates needed to officially win the nomination, most observers didn’t expect Clinton to clinch it over rival Vermont Sen. Bernie Sanders until Tuesday, when voters in a handful of states—such as New Jersey and California—cast their ballots.

Despite the news reports, though, Clinton wanted to push attention toward the following day’s votes.

If the counts by the AP and NBC News are correct, Clinton will have broken the glass ceiling, becoming the first woman in history to become a major party presidential nominee.

“My supporters are passionate, they are committed, they have voted for me in great numbers across the country for many reasons,” Clinton told the crowd at a stop in California earlier Monday. “But among the reasons is their belief that having a woman president would make a great statement—a historic statement—about what kind of country we are, what we stand for. It’s really emotional.”

However, just because a superdelegate has indicated in a survey they’re going to support a given candidate, the actual vote doesn’t occur until the Democratic National Convention being held next month in Philadelphia. Sanders has vowed not to give up his campaign until the convention, in the hopes that enough superdelegates who have indicated they will support Clinton will switch into his camp.

Sanders has indicated he intends to force a contested convention by refusing to drop out until the moment he is officially eliminated from contention.