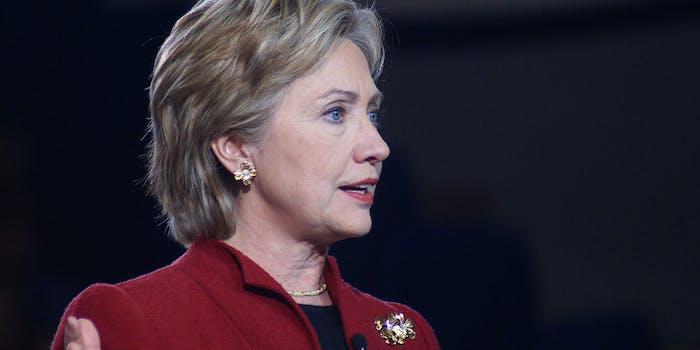 She angered LGBT advocates with her revisionist history. But will her apology be enough to win them back?

On the day of former First Lady Nancy Reagan’s funeral, presidential hopeful Hillary Clinton applauded her for starting a “national conversation” about AIDS. Her comments started another national conversation about Clinton’s revisionist history: now she’s taken to the Internet to apologize for her comments with a post on blogging platform Medium.

Clinton’s comment was made during an interview with MSNBC’s Andrea Mitchell. Apropos of nothing, the former senator and secretary of state said the following:

“It may be hard for your viewers to remember how difficult it was for people to talk about H.I.V./AIDS back in the 1980s. And because of both President and Mrs. Reagan – in particular, Mrs. Reagan – we started a national conversation, when before nobody would talk about it. Nobody wanted anything to do with it.”

She added: “That, too, is something I really appreciated with her very effective low-key advocacy, but it penetrated the public conscience and people began to say, ‘Hey, we have to do something about this too.’”

For those familiar with the attitude of the Reagan administration towards AIDS and its victims—the epidemic was not mentioned in a speech by Reagan until 1987, six years after the Centers for Disease Control and Prevention identified it—Clinton’s version felt like a slap in the face, particularly to the LGBT community. A tweetstorm by Garance Franke-Ruta of Yahoo Politics does a great job explaining this seemingly misguided point of view.

After Clinton was skewered for her comments, she first issued a brief statement on the matter.

Hillary Clinton’s statement on her comments about the Reagans' record on HIV and AIDS: pic.twitter.com/RtIs0zpJfk

But when that didn’t quell supporters furious with her original comments, she went further, publishing a piece via Medium to better explain herself. She writes that her comments were “inaccurate” and that she “made a mistake, plain and simple.”

To be clear, the Reagans did not start a national conversation about HIV and AIDS. That distinction belongs to generations of brave lesbian, gay, bisexual, and transgender people, along with straight allies, who started not just a conversation but a movement that continues to this day.

The AIDS crisis in America began as a quiet, deadly epidemic. Because of discrimination and disregard, it remained that way for far too long. When many in positions of power turned a blind eye, it was groups like ACT UP, Gay Men’s Health Crisis and others that came forward to shatter the silence — because as they reminded us again and again, Silence = Death. They organized and marched, held die-ins on the steps of city halls and vigils in the streets. They fought alongside a few courageous voices in Washington, like U.S. Representative Henry Waxman, who spoke out from the floor of Congress.

She also pointed out that at the 1992 Democratic National Convention when her husband, Bill, accepted the nomination, they had two HIV-positive speakers, which was a first for the convention.

In her comments, Clinton issued a call to action to stop the AIDS epidemic, which is still ongoing.

I believe there’s even more we can — and must — do together. For starters, let’s continue to increase HIV and AIDS research and invest in the promising innovations that research is producing. Medications like PrEP are proving effective in preventing HIV infection; we should expand access to that drug for everyone, including at-risk populations. We should call on Republican governors to put people’s health and well-being ahead of politics and extend Medicaid, which would provide health care to those with HIV and AIDS.

Ultimately, Clinton took a major gaffe and turned it into an opportunity to express strong policies and restore faith with her LGBT supporters. But whether this post is enough to win them back remains to be seen.