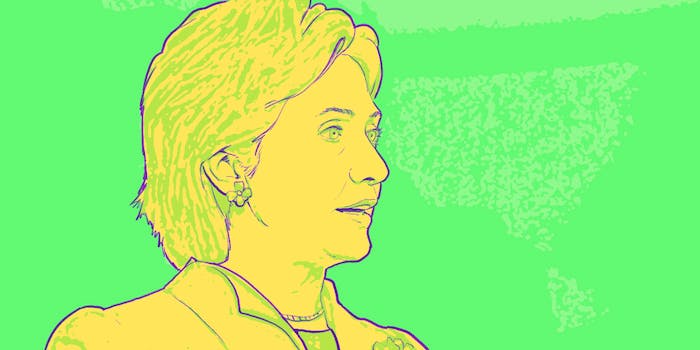 'I consider him very close to a patriot,' a voter told Clinton at a town hall meeting on Friday.

Like a phantom, the debate over Edward Snowden is now following Hillary Clinton around on the campaign trail.

Since remarking during the Democratic debate that Snowden “could have been a whistleblower” if only he’d followed the law, Clinton has faced a tide of coverage disputing her claim. And now she’s being confronted publicly by voters who don’t believe it either.

“I consider him very close to a patriot,” an audience member told Clinton at a town hall meeting in Keene, New Hampshire, on Friday, which was broadcast on CSPAN. “I think the information that he released is something that the American people needed to know and to have and to have publicized.” Other audience members clapped.

Nodding, Clinton responded that America has a “tradition… that shields people who come forth acting out of conscience to present information they believe the public should have,” doubling down on her insistence that Snowden would have been protected, if only he’d revealed that the NSA was spying on law-abiding U.S. citizens through “a proper channel.”

“I do not know why,” Clinton continued, “in addition to releasing the information you’re referring to, that he felt compelled to steal a lot of information that by any definition had nothing to do with American civil rights, liberties, and privacy, but instead were about terrorists and what other nations… do to try to gather information about us and what our government tries to do to prevent that and to try to get information about them.”

For the New Yorker Wednesday, John Cassidy wrote that privacy-conscious Democrats are scrutinizing Clinton. Her position that, had Snowden remained in the United States, he would have had “all of the protections of being a whistleblower” mirrors that of the president’s, Cassidy said, “But it doesn’t withstand inspection.”

As the Daily Dot reported as well, Clinton’s assertions ignore several key facts: the Intelligence Community Whistleblower Protection Act (ICWPA) would not have protected Snowden from retaliation. And the executive order signed by President Obama in 2012, which does protect government employees from retaliation, does not extend to Snowden, who was only a contractor.

Sad to see Hillary repeat a false claim despite fact check. She could develop a reputation. http://t.co/WX47TJ5xag pic.twitter.com/4XJ9N3obQH

As both Cassidy and Greenberg noted, former NSA staffer Thomas Drake—who blew the whistle on the Trail Blazer project, a now-defunct and by all accounts highly flawed U.S. government project for tracking cellphone and email communications—was indicted under the Espionage Act, even though he followed the steps allegedly shielded by the whistleblower protection act for reporting abuse up the chain of command.

In a memo, Gen. Michael Hayden, NSA’s director at the time, warned that several individuals— including Drake—who had been “in a session with our congressional overseers, took a position in direct opposition to one that we had corporately decided to follow.”

Hayden continued: “Actions contrary to our decisions… will have a serious adverse effect on our efforts to transform NSA, and I cannot tolerate them.”

A report released in 2011 by the inspector general of the Department of Defense found that Trail Blazer was “poorly executed and overly expensive.” Before the U.S. Senate, Hayden acknowledged that, after spending $1.2 billion, the program was behind by “a couple to several hundred million” dollars.

Despite exile and his status in many circles as a traitor, right now, Snowden has his own megaphone in U.S. politics. There’s also a sizeable force of activists, supporters, and human-rights organizations—not to mention pro bono attorneys—loudly defending his actions.

“There is, I think in many ways, a lack of political courage in the established class,” Snowden told a crowd at Bard College on Friday afternoon. “Everyone in the nation feels that.”

Clinton’s presidential campaign, Hillary for America, did not respond to a request for comment.