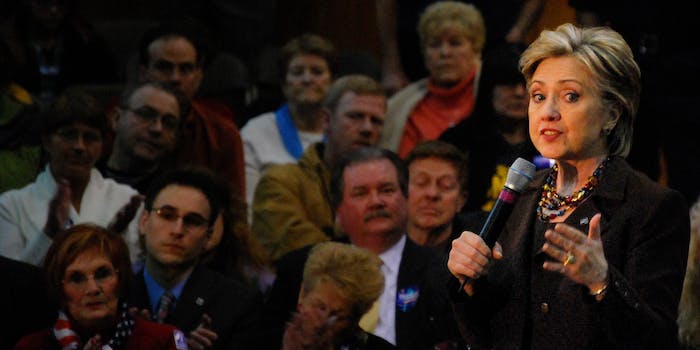 Photo via Rona Proudfoot/Flickr (CC BY 2.0)

Hillary Clinton deleted all of her private server’s email

Hillary Clinton not only conducted official email correspondence on a private server as secretary of state, she deleted that server’s email altogether around October. This according to Rep. Trey Gowdy (R—S.C.), the chairman of the congressional committee investigating the attacks in Benghazi on a U.S. consulate.

“While it is not clear precisely when Secretary Clinton decided to permanently delete all emails from her server, it appears she made the decision after October 28, 2014, when the Department of State for the first time asked the Secretary to return her public record to the Department,” Gowdy said in a statement, later adding: “Not only was the secretary the sole arbiter of what was a public record, she also summarily decided to delete all emails from her server, ensuring no one could check behind her analysis in the public interest.”

Clinton’s lawyer David Kendall informed the committee via letter that a study of the server revealed no emails sent during her time in office remained: “There are no [email protected] emails from Secretary Clinton’s tenure as secretary of state on the server for any review, even if such a review were appropriate or legally authorized,” Kendall wrote.

The Benghazi committee previously subpoenaed the server this month and called for an independent study of it. The server itself ran out of her Chappaqua, N.Y., home and enjoyed round-the-clock Secret Service protection.

Earlier this month Clinton copped to deleting 30,000 personal emails that were roughly half of the total she sent as secretary of state. In a press conference she explained the move by saying that “They were personal and private, about matters that I believed were in the scope of my personal privacy and that, particularly, of other people.”

She has, however, turned over about 50,000 printed emails—900 pages of which have gone to the committee—to the State Department for review in a transparency play that Clinton called “unprecedented.” Those emails will be made public pending the department’s investigation, and will begin with several-hundred pages of Benghazi-related correspondence.

Clinton spokesman Nick Merrill responded to Gowdy via statement: “Secretary Clinton has already turned all of her work emails over to the State Department in keeping with the letter and the spirit of what was required, and in full response to the Department’s request of former Secretaries. The State Department has been responsive to the committee, and will continue to be… Representatives of Secretary Clinton’s office have been in touch with the committee and the State Department to make clear that she would like her emails made public as soon as possible and that she’s ready and willing to come and appear herself for a hearing open to the American public.”

Correction: The committee has received 900 pages of Clinton’s printed emails.

Photo via Rona Proudfoot/Flickr (CC BY 2.0)