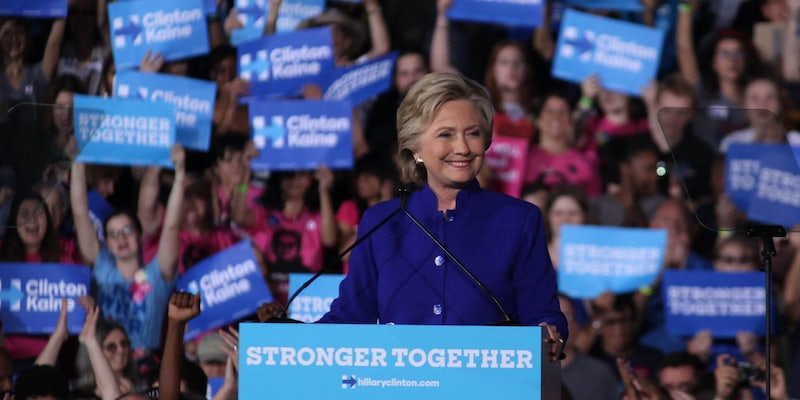 It's an epic handshake meme come to life.

Is Hillary Clinton going to run for president again in 2020?

According to her, the answer—in no uncertain terms—is “no.” In March, she told a New York TV station flatly “I’m not running.”

And yet, that was quickly followed up by a tweet from New York Times reporter Maggie Haberman that cited a source close to Clinton who said “she wasn’t trying to be emphatic and close the door on running.”

Since then, Clinton has continued to make absolutely no effort in putting together a third run for the White House. Everyone else, though? Not so much.

Clinton not having completely slammed the door on running hasn’t had any effect on the actual Democratic primary. But it has made an impact on social media, where a weird mix of both liberals and conservatives have been extremely vocal in their desire that the two-time Democratic candidate give it one more shot.

For very different reasons, of course.

On the left, you have accounts like “Hillary Warned Us” and “WithClinton2020” who insist that not only did Hillary actually win the 2016 election (according to the Electoral College, which certified her opponent, she did not) but that she’s been biding her time to run again. Why? Because nobody in the current field shows any sign of being able to defeat President Donald Trump.

Hillary, you need to run.

Hillary would’ve owned EVERYONE on the #DemDebate stage tonight. Wish she were up there. @HillaryClinton #hillary2020 pic.twitter.com/75bwGnO2Dm

Twitter is full of such fervent hope that Clinton will swoop in at the last minute and deliver America from the nightmarish Trump years, and it’s not hard to see why. A certain level of wistfulness and nostalgia regarding Clinton is expected from the people who spent two years boosting her candidacy.

After all, her defeat came with an overwhelming popular vote win, showing that a majority of voters actually did prefer her once, and might again.

But no such wistfulness can be expected on the part of conservative activists who seem to be obsessed with the idea that Hillary will run for a third time.

One is Jacob Wohl, the right-wing troll who uses his Instagram account to regularly call for “Hillary 2020.”

Fellow right-wing media personality Milo Yiannopoulos has also used Telegram to expressed the same “desire” for her to run again, Telegram being the only major social media provider who hasn’t banned him yet.

Given that nothing Wohl or Yiannopoulos write can be taken in good faith or at face value, it’s highly likely that this is all just trying to get some cheap laughs out of their fans—who are numbering fewer and fewer.

Then there’s Trump staffer Kellyanne Conway. She reacted to a Wall Street Journal opinion piece from 2018—written by a former Clinton advisor—that claimed Clinton would take one more run at the White House, with “Dear God, please, yes.” Unlike Wohl and other right-wing trolls, it’s likely that Conway was completely serious.

Because that’s been the sentiment of her boss, as well.

Trump himself expressed a bit of wistfulness (maybe for the first time ever) when Clinton closed the door.

“(Crooked) Hillary Clinton confirms she will not run in 2020, rules out a third bid for White House.” Aw-shucks, does that mean I won’t get to run against her again? She will be sorely missed!

The ever-present drumbeat of stories that Hillary hasn’t 100% closed off the idea of running, combined with the lack of an overwhelmingly popular Democratic candidate to emerge, does seem to leave a little doubt that she’s done.

Even online betting sites, taking bets on who the Democratic nominee, aren’t willing to let it go. Just in September, U.K. bookmaker Ladbrokes has seen an abrupt rise in bets on her, to the point where her odds are higher than people like Sen. Cory Booker (D-N.J.) and Beto O’Rourke—and they’ve gotten more bets on her than any other candidate.

Clinton’s status as an underdog combined with the number of bets she’s getting means that if she did get the nomination, the gambling site would take a bath. She’s still not the favorite (Elizabeth Warren is currently getting the best odds) but she’s definitely a major player. And people are willing to bet money to prove it.

Well look at this!
I still believe @HillaryClinton is the most qualified person to be POTUS and I believe the 2016 election was stolen from her. Needless to say, I'd be all in. #Stillwithher
Thoughts?https://t.co/skeHr3UThH

If she does change her mind, she’d be joining a small group of American politicians who have run for president three times. In fact, before the endless primary campaigns of the last few decades, it used to be fairly common to simply keep running for president.

Legendary statesman Henry Clay ran four times between 1824 and 1848, while William Jennings Bryan was the Democratic nominee three times, in 1896, 1900, and 1908. More recently, former Illinois governor Adlai Stevenson won the Democratic Party nomination in 1952 and 1956, and lost to Dwight Eisenhower both times—then ran for it again in 1960, only to lose in the primary to John F. Kennedy.

Hubert Humphrey also ran three times for the Democratic nomination, never getting it. And Ronald Reagan won the Republican nomination, then the White House, on his third try.

But times have changed, and it’s exceedingly rare for an unsuccessful party nominee to run again. It’s not like there was a big movement to draft John McCain to run again in 2012, who responded to a tweet asking if he was running again by laughing “no, it’s time for a new generation.”

Mitt Romney decided in January 2015 that he wasn’t running for the Republican nomination again, telling a conference call “I’ve decided it is best to give other leaders in the Party the opportunity to become our next nominee.”

But as Trump surged through the primary, there were calls for him to swoop in and save the day. Instead, he gave a speech castigating Trump to no avail.

Like these other previous candidates, Hillary Clinton has said she’s not running. She’s never hinted otherwise. So why is there a movement to draft her?

In some cases, the reasons go back to her doing so well in the popular vote, yet losing anyway. To both sides, this represents a reason she should run again. Democrats see her razor-thin margins in key states as a sign of hope.

Republicans see that she did, in fact, lose the last time. And they think would lose again

Clinton is already giving advice and warnings to 2020 candidates, and still roasting Trump on Twitter. It wouldn’t take that much to turn this into a presidential run.

Hillary Clinton says she’s talked to many 2020 candidates about things like digital outreach and investments in the early states. Says she has ended the convo with a warning about voter suppression efforts.

But beyond that, the Clintons have been fixtures on the national political scene for 40 years. There are libraries of books about their accomplishments—and their scandals. Clinton closing the door on running means that the most powerful couple in American political history is no longer around. That’s a hard pill for a lot of people to swallow, particularly those who have made careers out of attacking them.

So it makes sense that so many people would hold out hope for her to run one more time, either to see her finally win or lose again.