Rep. Paul Ryan and actor Ryan Gosling have another thing in common aside from the droopy eyes. Both have received the “hey girl” meme treatment.

A Republican representative from Wisconsin, Ryan now stars in “Hey Girl, It’s Paul Ryan.” The new Tumblr is exactly what it sounds like: blocky white letters that usually begin with the variation of “hey girl” and end with how Ryan is economically conservative.

As chairman of the House Budget Committee, Ryan’s star power has increased as the economic issues have been pushed to the forefront of both parties’ agendas. He is also considered a potential vice-presidential pick for Mitt Romney.

So, if you’re into economic-themed memes, this blog does the trick. One entry reads “Girl, economics is the ONLY thing I’m laissez-faire about,” a nod to Ryan’s hands-off approach in economic policies. Another meme pokes fun at President Barack Obama’s new “Forward” slogan and how Ryan wants to cut costs.

But if this all economic talk is boring and hard to think about, how about cuddling up with Ryan and “work up some sexy infographics.”

At least that’s something both parties can agree on. 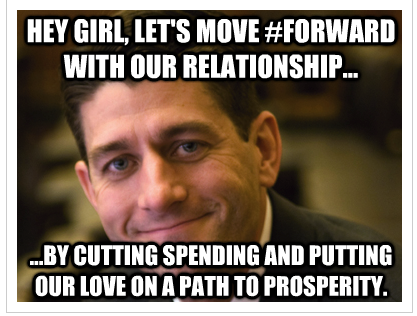