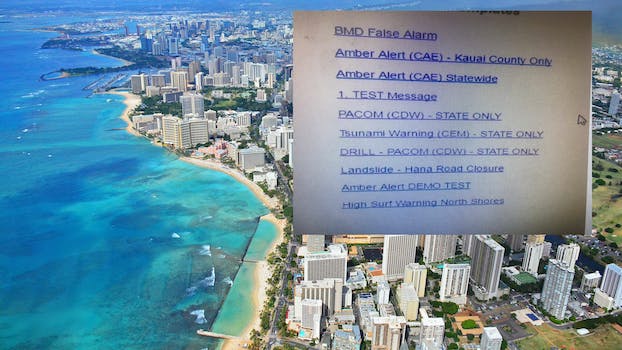 A new option was added so authorities can quickly alert residents of a false alarm.

On Saturday, a false alarm set off panic in Hawaii. Mobile phones and televisions throughout the islands displayed an alert stating a ballistic missile strike was imminent: “BALLISTIC MISSILE THREAT INBOUND TO HAWAII, SEEK IMMEDIATE SHELTER. THIS IS NOT A DRILL.”

After 38 long minutes, terrified residents learned the alert was sent out in error. The Hawaii Emergency Management Agency (EMA) later admitted the mistake was made during a shift change by an employee who accidentally pressed the wrong notification from a drop-down menu.

It’s easy to blame the employee who accidentally sent out the message, but you’ll have sympathy once you see the monstrosity they were working with. The Honolulu Civil Beat reportedly obtained a photograph of the alert system used by EMA to send out tests to residents of Hawaii.

This is the screen that set off the ballistic missile alert on Saturday. The operator clicked the PACOM (CDW) State Only link. The drill link is the one that was supposed to be clicked. #Hawaii pic.twitter.com/lDVnqUmyHa

The above photo isn’t an actual image of the alert system, but it’s an “acceptable representation” of the system released “for security reasons,” Richard Rapoza, EMA’s public information officer, told the Verge.

The webpage looks like it was created by a high school student on their first day learning HTML—just a white page with blue links and a single space between them. Almost all of the options look the same. Three of them start with “Amber Alert,” and three end in “STATE ONLY.”

Instead of overhauling the interface and adding deeper safety measures, EMA added “BMD False Alarm” to the top of the list to notify the public more quickly when false alarms do occur. The agency will also require two people to be present when an alert or drill is sent out.

But there could be more significant changes to come now that the Federal Communications Commission, which controls the wireless alert system, is launching an investigation to ensure such crucial information is responsibly communicated to the public.