“Anyone who uses Twitter for work will get lots of mileage out of it for sure.”

The brainchild of Londoner Ben Gomori, the HashKey is intended a time-saving device: “No more wondering how to do a hashtag on your computer or having to press two keys to make it happen,” the crowdfunding campaign exclaims. “We want to save social media nerds around the world valuable seconds and celebrate the mighty hashtag’s contribution to digital communication!” 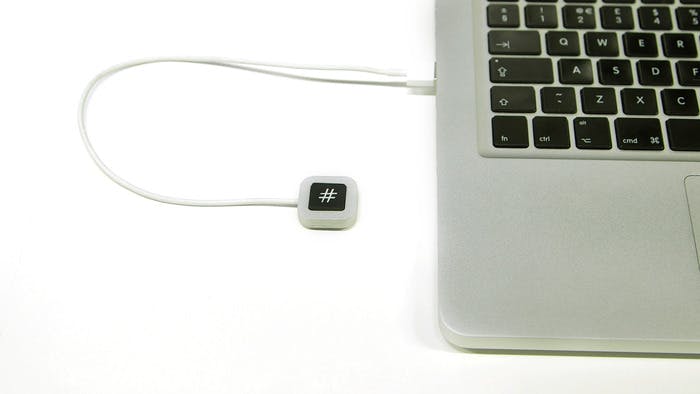 It “started out as a bit of fun and then I realized that social media types might actually find it useful,” Gomori told the Daily Dot in an email. “Then we realized we could develop some really useful iterations of the product with different functions. And I think it’s aesthetically pleasing to have on your desk—sort of like an executive toy but one that actually does something.”

Gomori didn’t have a working prototype he could show us (the brushed aluminium mockups won’t be reflective of the finished, plastic product), but claimed it wouldn’t be a novelty product. “Anyone who uses Twitter for work will get lots of mileage out of it for sure.”

Seeking $23,500 to bring the product to the market, the Kickstarter campaign has currently raised just $474, with 26 days to go. A single HashKey is going for $27 (with an estimated delivery date in March 2015), and rewards for big pledgers include an hour-long “social media consultation via Skype,” as well as having Gomori—who also works as a DJ—create a “bespoke track for you using whatever samples and sounds and styles you like!”