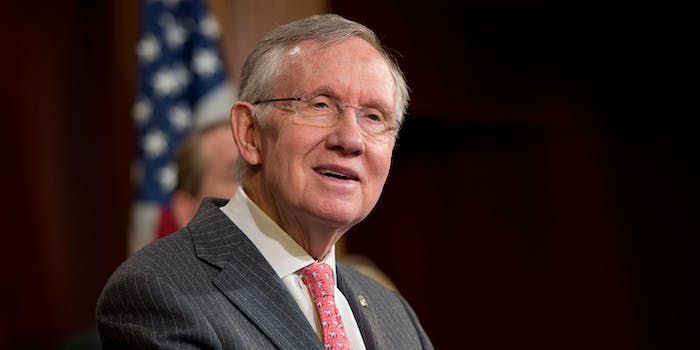 This is not the most dignified way to step down as Senate majority leader.

According to a statement from his office, Reid was exercising at home when an unspecified piece of equipment snapped, breaking “a number of ribs and bones in his face.”

He was rushed to the hospital Thursday, where he spent the night as a precaution, though he plans to be present when the new Senate convenes Tuesday.

How, exactly, one breaks so many bones from such disparate areas of one’s body, is a subject ripe for speculation, and his office didn’t respond to the Daily Dot’s request for clarification. Was it a rowing machine that snapped mid-thrust, as happened to Frank Underwood? Did an ab machine collapse on him mid-crunch? Was he using one of those old-timey vibrating belts, which suddenly became sentient and attacked him, focusing on his body and face like a boxer would?

The senator was previously injured in 2011, when, after jogging in the rain, he rested his hand on a car, slipped and fell to the ground, dislocating his shoulder and bruising his face.