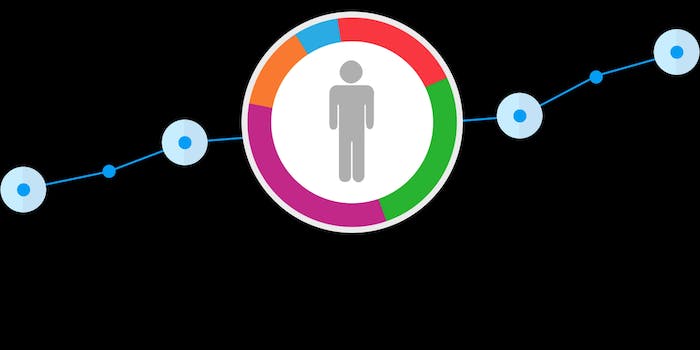 Can an app make you happy?

The first "emotional fitness service" app of its kind is revolutionary, but is it effective?

I am not a particularly happy person. This is not to say I’m particularly sad or unhappy; it’s just that given my chemical makeup and natural cantankerousness, it takes a lot more to get me excited (and a lot less to make me anxious) than the average person. For this reason, I’ve always considered achieving happiness in the same vein as winning the lottery, or having multiple G-spot orgasms: Something really awesome that happens to a rare lucky few, but odds are it probably won’t happen to me.

So when I heard about Happify, a startup that co-creator Tomer Ben-Kiki refers to as “the first emotional fitness service” app of its kind, I was skeptical, to say the least. (I believe my exact words to my editor upon learning about it were “[vomits into cupped hands”]).  Launched last October, Happify combines the touchy-feely, emotion-based language of the self-help market with the more results-oriented, research-based aspects of startup culture: Simply put, it aims to use the “science of happiness” to help its users lead “happier, more fulfilling [lives].”

Like the brain-training app Lumosity (which has plenty of skeptics), Happify lets users hone their happiness “skills” by doing daily games and activities, such as Uplift (where you click on positive “word balloons,” letting the negative ones sink to the ground) or posting a “grateful moment” of the day. These activities are organized into different happiness “tracks,” based on what Happify deems the “five essential skills” for happiness: savoring, thanking, aspiring, giving, and empathizing. 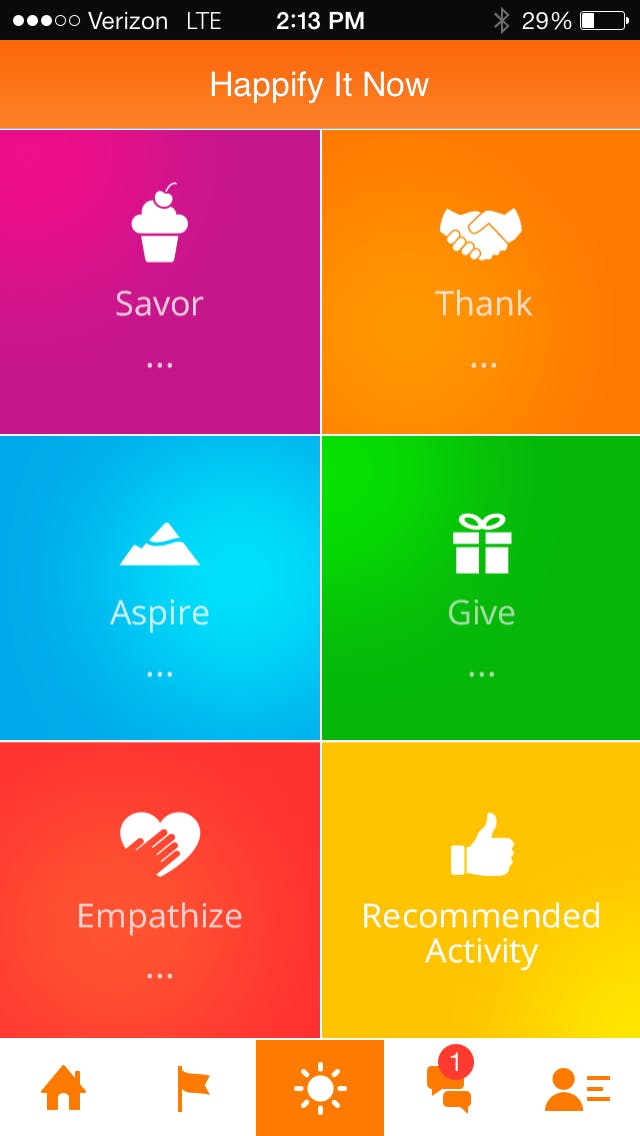 If you allow your profile settings to be public, there’s also a social networking component to the app, where other Happify users can view your activities and “like” or comment on them. If you complete a set number of activities, you’re awarded silver or gold medals for your progress, which adds a gamification component to the app (before co-founding Happify, Ben-Kiki’s background was in the gaming industry).

The activities are based on research from psychologists and neuroscientists at universities such as UPenn, which is widely considered one of the epicenters of “positive psychology,” a branch of psychology that focuses on life improvement and “the science of happiness.” Ben-Kiki founded Happify six years ago after seeing a lecture on positive psychology, which he refers to as a “branch of science that deals with what happens when you’re OK, but you wanna do great” mentalityy.

“Happiness is a skill just like physical fitness,” Ben-Kiki told me when I visited the Happify office last week. “You’re genetically disposed for some physical attributes: Some people are stronger, and can run faster, etc. But still anyone who trains improves that vector they focus on. It’s the same with happiness.” 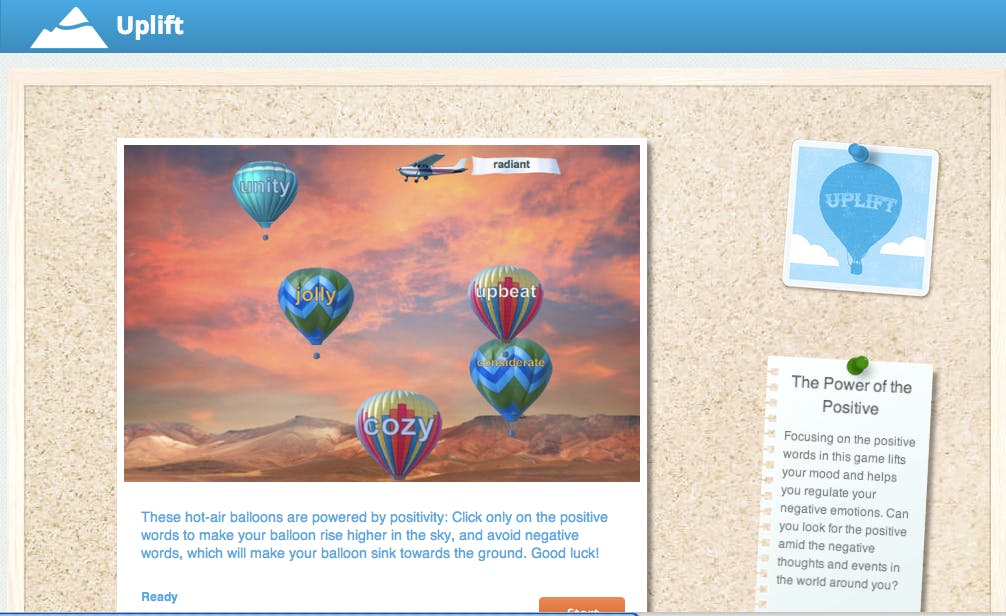 Much like physical fitness, there is a “genetic predisposition” for your happiness level: Ben-Kiki says that about 50 percent of it is genetically predetermined, while 10 percent is based on environmental factors. What Happify wants to do is get the most out of that remaining 40 percent that’s based on activity, by helping you “train and stay fit where you can get the most out of” your happiness baseline.

As someone with a fairly low happiness “baseline” and a healthy skepticism of both startups and self-help products, the idea of packaging something as nebulous and unquantifiable an emotion as happiness into an app struck me as both highly cynical and highly dumb. Given the extensive body of research supporting the idea that technology and social networking platforms actually decrease our feelings of happiness and self-worth, it seemed highly unlikely that a social self-help app could be effective. How many people, I wondered, believed that an app like Happify actually works?

As it turns out, quite a few. While in private beta, the app garnered nearly 100,000 members, and received nearly $3.8 million in funding. Furthermore, now that the app has been on the market and out of beta for a few months, the company claims that there is significant evidence for its effectiveness. Ben-Kiki has said that users report an 86 percent increase in happiness over the course of two months, and Tiffany Sun, the head of content development for Happify, says users who do Happify activities two to three times a week report three times the level of happiness as those who do them only once a week.

Of course, there’s reason to be skeptical of those claims, not only because of the inherent difficulties of asking people to quantify and self-report an emotion as amorphous as “happiness.” Although Ben-Kiki says that Happify has “focused very heavily on efficacy” while developing its activities, conducting numerous studies and presenting data from 50,000 members at the International Positive Psychology conference last year, a Bloomberg Businessweek article from last November questions whether the app has “undergone the kind of rigorous testing needed to support” its claims of effectiveness.

There’s also the issue of whether or not Happify can effectively treat people like me, whose happiness “predispositions” tend to be lower than the average person, and who may exhibit tendencies toward anxiety or depression. Happify provides mental health counseling resources in their terms and guidelines section, but when I raised the question of whether the app could help those struggling with mental health issues to Ben-Kiki, his answer was pretty much “no.”

“The product itself is a kind of general audience type of product,” he says. “We’re not qualified to deal with people who have certain levels of issues, nor would we want to represent ourselves as saying we are. We want to make sure they get the help they need, but we feel we’re covering a different area of the market that’s underserved;” i.e. people who may not have depression or anxiety, but would like to improve their emotional health nonetheless.

So if Happify doesn’t serve as a palliative for symptoms of anxiety or depression, and its activities have not quite proven itself to be effective at increasing users’ general “emotional fitness,” does it actually live up to its stated goals of making people happier? After using the app for a few days, I was surprised to discover that yes, it actually does, though perhaps not in the ways most users would expect.

As a user of the free version of the app (the premium version costs $12.95 per month), the number of activities I could access was somewhat limited, and the ones that were clearly more game-inspired—the “Uplift” positive word balloons, for example—struck me as a pointless waste of my thumb and forefinger’s time and energy. 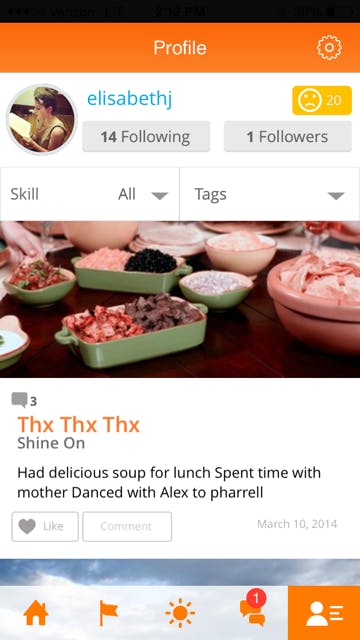 Yet when I was prompted to enter activities I was grateful for and looking forward to, something surprising happened: I realized that being forced to think about the few things in the world that make me happy—food, my cat, my family, food, my boyfriend, and food—actually made me happy. By prompting me to set aside a few minutes to reflect on what I was most grateful for, Happify forced me to take inventory of the things that I usually take for granted. Even the social aspect of the app was oddly gratifying: Whenever other users commented on my updates, even if it was just a smiley face or a brief show of enthusiasm on a description of a recent meal, it was nice to get validation from other users that the things in my life were just as awesome as I felt they were. 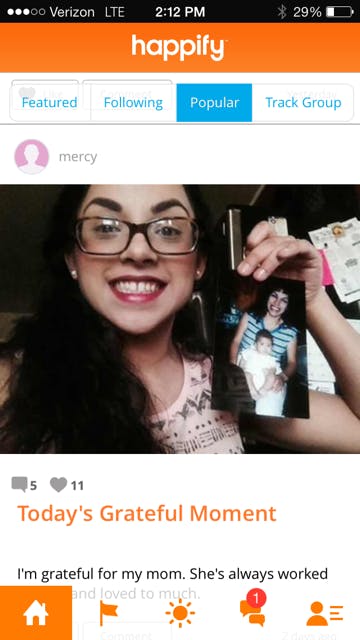 The idea that thinking about things that make you happy can make you happy might sound obvious or self-explanatory, but Ben-Kiki says this is a fairly common response to Happify. “One of our users told us, ‘It reminds me of what’s important to me in life. Not what Happify says is important, but what’s important to me,’” he told me. “Just taking 15 minutes to enjoy that cup of coffee or piece of chocolate instead of five minutes—Happify helps [users] carve out the time to do that.”

So rather than focusing on what Happify can’t do to make us happier, maybe it’s better to focus on what Happify can do: give us those extra few minutes to savor that last sip of coffee, or last bite of chocolate, and remind us to take account of the things that we feel make our lives worth living. And while Happify probably didn’t need a positive word balloon game or $3.8 million of funding to remind its users to do this, it’s a valuable reminder nonetheless.