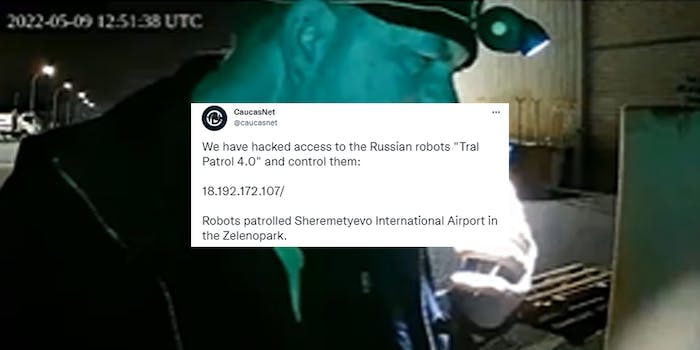 Did hackers commandeer surveillance robots at a Russian airport?

The hackers are citing Russia's invasion of Ukraine as justification.

A hacker group claims to have compromised a robotics company that sells wheeled surveillance robots in countries across the world, including Russia. At least one alleged victim, an airport outside of Moscow, refused to confirm or deny that an attack happened.

In a tweet earlier this month, the hacker group known as CaucasNet uploaded screenshots of an allegedly compromised web portal used to control the robots at the Sheremetyevo International Airport in Russia.

Known as the Tral Patrol 4.0, the unmanned ground video surveillance vehicle, according to online retailers, “is designed for outdoor patrolling because of its intelligent video surveillance system, which automatically scans the secured premises.” The company behind the robots, SMP Robotics, currently has distributors in numerous countries across the globe including the U.S. and Russia.

“It stops at pre-selected positions for optimal surveillance and inspects the area within 50 meters (164 ft) range to detect any moving objects or people,” a description states. “In case of detection, the video surveillance system focuses its steerable PTZ-camera on the object and transmits the video to the security post.”

Speaking with the Daily Dot, a member of CaucasNet alleged to have discovered a vulnerability in an online admin panel used to control the company’s fleet. The group has cited Russia’s invasion of Ukraine as the motivating factor behind the purported attack.

CaucasNet also uploaded a video to Twitter last week that appears to show them controlling the robots in multiple locations while broadcasting the Ukrainian national anthem.

The footage even suggests that the hackers used one of the robots to communicate with an unknown English-speaking individual.

In a statement to the Daily Dot, a representative for the Sheremetyevo International Airport declined to confirm whether any of its robots had been compromised.

“Sheremetyevo International Airport does not confirm the fact of hacker hacking of the security system,” the representative said.

SMP Robotics did not respond by press time to inquires from the Daily Dot regarding the alleged takeover of its robots.

The incident is not unlike numerous others in which hacktivists have targeted Russia in the wake of its aggression against Ukraine.

Hackers claiming affiliation with the hacking collective Anonymous gained access to dozens of CCTV camera streams in March, allowing them to plaster messages such as “Putin is killing children” onto the screens.

The war has led to an unprecedented hacking campaign against Russia, resulting in the theft and publication of more than 10 million files from the nation’s public and private sectors.