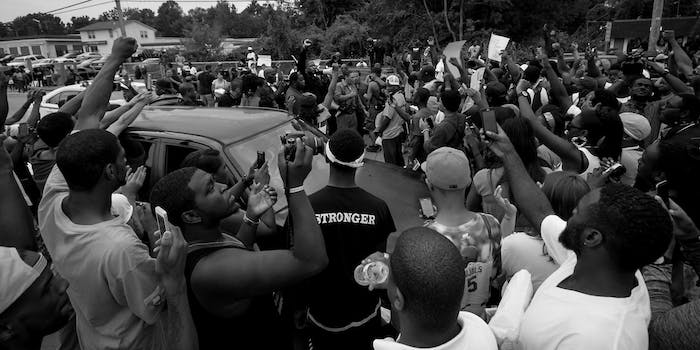 Shots rang out during a community march to a church in Ferguson, Missouri, on the anniversary of Michael Brown‘s death Sunday.

The gunshots reportedly came from an area behind the church, where police quickly gathered to assess the situation. Initial reports were that the shots were apparently unrelated to the march or to the fatal shooting of Brown one year ago.

St. Louis County Police Chief Jon Belmar told reporters on the scene that the incident was “unfortunate,” noting, “These are the exact kind of events we try to avoid… We are trying to keep everybody as safe as we can.”

The march to the church, consisting of about 300 peaceful protesters, was briefly halted while authorities investigated. The event then resumed without incident.

Silence for the death of #MikeBrown death in #Ferguson pic.twitter.com/XmBtOrntfN

Though the gunshots appeared to be unrelated to the protest, the media quickly circulated the news.

Brown’s death on Aug. 9, 2014, sparked nationwide protests and greater public scrutiny into police encounters with minority civilians. Although greater attention has been paid, unarmed black men are still at high risk of death from police action:

In 2015, unarmed black men have been seven times more likely to be shot and killed by police than unarmed white men. http://t.co/ue9NrDwDnU

In Ferguson, the protests continued, with support from bystanders in person as well as online.