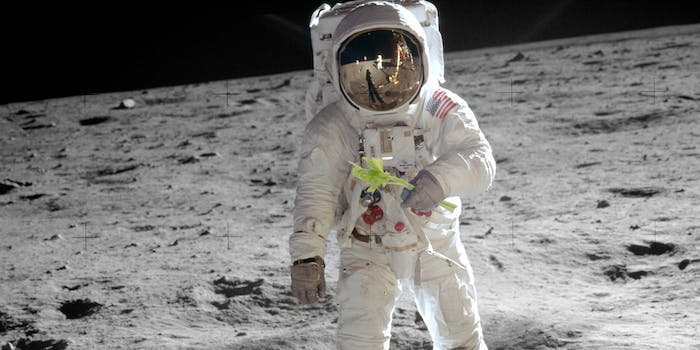 We talked to the NASA scientists helping make space agriculture a reality.

On Monday, Expedition 44 crew members aboard the International Space Station harvested a crop of “Outredgeous” red romaine lettuce from its orbiting laboratory, Veggie. The development could not only have significant nutritional implications for astronauts but also change the dynamics of future space exploration.

There are significant challenges to growing vegetables in space. Without gravity, plants rely on other signals to know which direction to grow, like the presence of light and water. NASA project manager Trent Smith, who’s part of the team that designed Veggie, explained how ISS’s plant-growth system works to the Daily Dot: “[T]he LED lights in Veggie signal the shoots to grow towards the light and roots towards the water and darkness of the plant pillows. … Roots need both water and air at the same time, and getting that mix right is extremely challenging.”

Water behaves completely differently in outer space, [and] typically will wet out a surface or form a ball.”

Astronauts stand to get more than just a healthy meal from all this freshly grown food aboard the space station. They’ll also enjoy the benefits of horticultural therapy as they float around in orbit.

“Fresh, nutritious food will be important to supplement our explorers’ diets as they leave Earth and step into the Solar System, [but] maintaining morale and keeping a connection to Earth is also important for psychological well being,” Smith said. “Sights and smells of home I feel will be important as we leave Earth.”

Since astronauts can’t yet cook in space, NASA researchers are focused on growing foods that can be eaten fresh. As future experimentation unfolds, astronauts may soon be subsisting on “leafy greens, tomatoes, peppers, radishes, and maybe herbs that could be mixed in the packaged diet,” added Dr. Gioia Massa, science team lead at NASA’s Kennedy Space Center. All the lettuce grown in her team’s Veggie is approved to for human consumption after a light cleaning with citric acid. A concept of where we might be headed in the future when it comes to generating our own food in outer space.

Once astronauts find themselves cooking aboard the space station and establishing distant bases on other planets, they’ll likely be growing a variety of different foods.

“Crops that require minimal processing, such as sweet potato and white potato, could be grown,” Massa said. “For well-established off-Earth bases, we may have other food [processing] capabilities and be able to process crops such as soybeans and wheat that would be more a part of a staple diet.”

There are currently no plans to harvest animals in space, but Dr. Massa tells us that “fish have been tested in the past.” Russian cosmonauts have been taking quail eggs into orbit since 1979, with the first of these successfully hatching in 1990, though the cosmonauts grew too attached to the newborn creatures to kill and eat them.

Dr. Massa says this type of experimentation is “critical” if humans are to explore the galaxy. The goal is to create a sustainable food supplement, one that’s seen as a crucial component of future Mars exploration.

“The farther away we go, the harder and more costly it is to bring food and other consumables, so using what we call bioregenerative food production will help us minimize what we need to bring from Earth,” Massa said.

“Also, I believe that the psychological benefit of having something green and growing, a little piece of Earth, with you when you are living and working in an extreme and stressful environment is incalculable.”