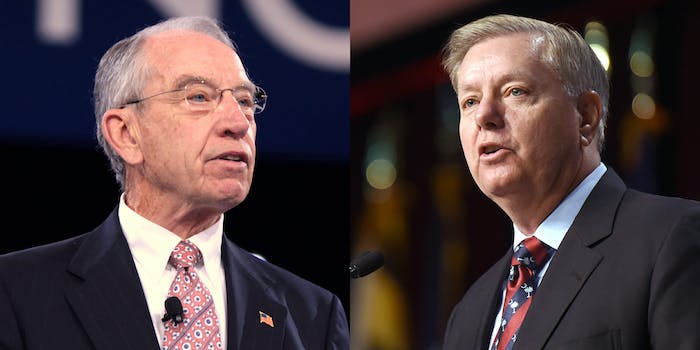 Last month, it was revealed that Sen. Chuck Grassley (R-Iowa) and Sen. Lindsey Graham (R-S.C.) recommended that the government open a criminal investigation into the author of the Trump-Russia dossier, Christopher Steele. Now a memo from the two sent to the Justice Department reveals their reasoning behind it.

More unredacted portions of Grassley-Graham memo released. The FISA applications are either materially false in claiming that Steele said he did not provide dossier info to the press prior to Oct 2016, or Steele made materially false statements to the FBI. pic.twitter.com/2OPCQpi6A7

Grassley and Graham allege that Steele may have knowingly made false statements to the FBI regarding whether he had spoken to the media about his research. At issue is a Yahoo News article that revealed U.S. intelligence agencies were looking into Trump associate Carter Page, an article they say was based off intel Steele gave them.

In the application for the Foreign Intelligent Surveillance Act (FISA) warrant, Graham and Grassley also contend that the Justice Department said Steele had not spoken to the press about the contents of the dossier, meaning either the FBI and Justice Department lied to the FISA court, or Steele lied to the FBI. Grassley and Graham recommend that both be investigated.

The charge made against the DOJ and the FBI in the Grassley-Graham memo echoes the sentiment in the controversial memo from Rep. Devin Nunes (R-Calif.), which alleges bias in the FBI and Justice Department, saying they relied solely on the Steele dossier to obtain a warrant to surveil Page.

The Steele dossier has been a flashpoint in American politics ever since its existence was revealed by BuzzFeed in January 2017. It alleges that the Russian government has compromising intelligence on Donald Trump and that it was actively working to get him elected president.