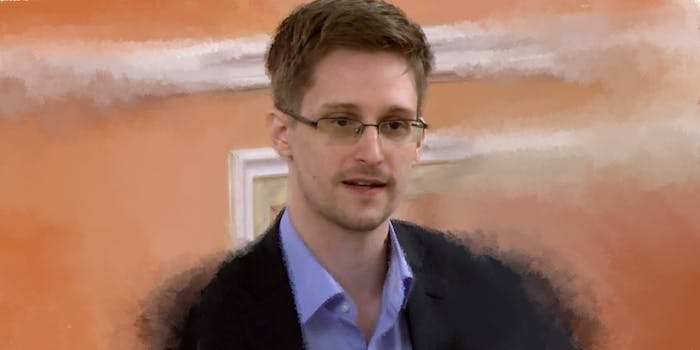 It's the most important surveillance question of our time—at least according to John Oliver.

The Internet is to answer perhaps the most pressing surveillance question of the modern era: Can the government see your dick?

The answer is: Probably, yeah. But for more information—and to learn exactly how the government acquires your dick pics—you’ll want to visit cantheyseemydick.com.

The word “they” in that URL refers to the National Security Agency, though its western counterparts—especially the British agency Government Communication Headquarters (GCHQ)—have programs on par with those of the NSA. The question itself comes from Last Week Tonight host John Oliver’s lengthy interview with Edward Snowden, the former NSA contractor who provided a vast trove of agency documents to journalists in 2013 and currently lives in de facto exile in Russia.

In the interview, which aired on Sunday, Oliver sought to make surveillance laws simple for the many Americans who don’t understand them. His solution was to make the abstract concept of “personal data” a bit more specific and a bit more concerning—hence, your dick pics.

“The good news is that there is no program named the Dick Pic Program,” Snowden said. “The bad news is they are still collecting everybody’s information. Including your dick pics.”

Snowden went on to explain how an online picture of someone’s penis could end up in an NSA database under several different programs and legal authorities.

“As Snowden says in the interview, it’s difficult for people who have existing technological expertise to ‘think like beginners’ about this topic,” Olivier Lacan, the Paris-based webmaster of cantheyseemydick.com, told the Daily Dot in an email.

Lacan whipped up the site in mere hours after watching Oliver’s interview on Sunday evening.

The site is more than a simple gag. It’s also a clear, concise catalog of the programs and authorities detailed in the Snowden leaks. Each section includes a link to the program in question so that concerned citizens can learn more about what the government is doing and how.

“I was also impressed that Oliver and his team worked on this well ahead of the June deadline for the Patriot Act vote,” Lacan said, referencing the 2001 law that underpins much of the legal authority for U.S. surveillance.

The Patriot Act will expire in June if it is not renewed by Congress. Lacan said that this “seems like a perfect opportunity for people at the EFF for example to further educate American citizens and get them to reach out in mass [sic] to their congresspeople the same way people historically overwhelmed congress [sic] before SOPA.”

Can they see your dick? Yes. Can you stop them? You owe it to yourself to try.

Photo via TheWikiLeaksChannel/Wikimedia Commons (CC BY 3.0) | Remix by Max Fleishman