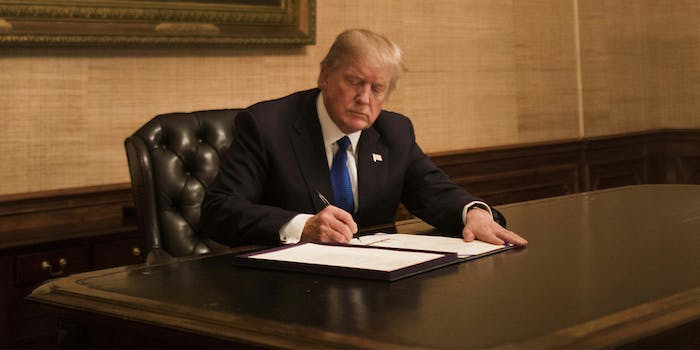 In the constant barrage of news and outrageous comments coming out of the White House, it is easy to forget one of the key shortcomings of the Trump administration: many government positions remain empty. Even though Trump has been in office for over a year, hundreds of prominent jobs remain unfilled.

The Washington Post has been tracking the unfilled nominations in the Trump administration, and as of Feb. 16, only 267 of 636 positions have confirmed nominees. And 225 of the positions don’t even have a nominee. The unfilled positions span various government departments and include some of the most important positions in government.

The president made his case for leaving these positions open by tweeting at his favorite TV show.

.@foxandfriends We are not looking to fill all of those positions. Don't need many of them – reduce size of government. @IngrahamAngle

However, should a difficult situation arise, some of these vacancies could cause serious problems.

Rex Tillerson’s State Department has been criticized in a number of outlets for not accomplishing very much in the first year of Trump’s term. It’s hard to argue this isn’t by design. The Trump Doctrine looks like it is going to be light on diplomacy and heavy on military presence. Trump has said he puts trust in his generals, and that means he doesn’t put much stock in diplomacy.

Though vacancies in the Department of Justice and various regulatory positions may have disastrous consequences, the hollowing out of the State Department may have the most dire impact on the U.S. in the long term. The New Yorker’s Dexter Filkins, who has covered Tillerson’s tenure extensively, recently wrote, “Secretary of State Rex Tillerson might not have his job for much longer, but his tenure may well be regarded as the most consequential in post-war American history: not for what he built but for what he destroyed.”

In addition to these unfilled positions, hundreds of career diplomats have opted to resign rather than work for Trump. When Tillerson came to the job, he aimed to cut the department’s budget by a third, transferring the workload of skilled diplomats to an already overextended military. Two career diplomats were so disheartened by Tillerson’s austere reign, they took to the New York Times to outline the potential calamities that lay ahead with a severely understaffed and poorly budgeted State Department.

When you look at the list of unfilled positions in the Trump administration, one of the striking things is how many ambassador positions remain empty. Furthermore, some of the countries that remain without an ambassador are in strategic or volatile regions. As an aggressive Saudi Arabia further strains relations in the Middle East, the U.S. is without a much-needed diplomatic presence in the region. There is no ambassador in Saudi Arabia, Qatar, Egypt, Jordan, or Yemen, at a time when Saudi Arabia is involved in direct conflict with both Qatar and Yemen.

Last fall, Jared Kushner caused an international incident when he met with Mohammad bin Salman, the young crown prince of Saudi Arabia, late into the night before bin Salman launched his soft coup that resulted in the imprisonment of various members of his family and government.

Trump has blatantly ignored the key office of National Drug Policy Control, despite his claim that the opioid epidemic is a priority. This lack of concern for one of America’s most pressing domestic issues is reflected in the delays of a number of key appointments. The administrator and deputy administrator roles in the DEA remain empty. The directorship of the Bureau of Alcohol, Tobacco, and Firearms is unfilled. There is also no director of National Drug Control Policy. It’s hard to imagine Trump is going to tackle the opioid issue in earnest with scant experienced leadership around the issue anywhere in his administration.

Nature and the environment

Ryan Zinke’s Department of the Interior, Rick Perry’s Department of Energy, and Scott Pruitt’s Environment Protection Agency have led a brutal campaign of neglect against America’s environment. This extends into the highest reaches of government.

Ten key positions in the Department of Energy remain vacant, including inspector general, director of the Office of Science, and several nuclear safety positions. The Department of the Interior is in pathetic shape with no nominee for director of the National Park Service, no pick for the head of the Bureau of Land Management, and no one to lead the U.S. Fish and Wildlife Service. Six key assistant administrator positions at the EPA remain vacant. The president’s Council on Environmental Quality has no nominees.

Rather than hire regulators and stewards of our land and resources, these three men have opted instead to hand over America’s resources to corporate interests. Sixteen of 45 appointees under Pruitt have worked for oil, gas, or chemical interests. Over a six-month period, Pruitt met with corporate executives and lobbyists 154 times. Interior Secretary Ryan Zinke wants to shrink his workforce by 4,000 people and uproot many of his current employees in a massive reorganization scheme. Rick Perry’s major policy proposal at the Department of Energy has been a coal industry bail out. With a gutted, disinterested staff, the departments aren’t even putting up a pretense of good faith activity.

While we could have expected Trump to do little when it comes to the environment or diplomacy, he has even left massive vacancies at the Department of Justice. Despite running as a law-and-order candidate, 16 major vacancies remain at the DOJ. Though Trump has nominated picks to head the criminal and civil divisions of the department, they haven’t yet been confirmed. Various other positions that involve mandates as varied as parole, immigration, tax law, and directing the U.S. Marshals are still vacant.

While these are the most prominent positions that remain empty, there are some unfilled posts that we can take as a personal insult or metaphors for our current situation. Trump has not appointed an ambassador-at-large for Global Women’s Issues, nor has he appointed a director of the Office on Violence Against Women. There is no special counsel for immigration-related unfair employment practices. Positions meant to assist the disabled and veterans with finding employment remain vacant. The chair positions in the National Endowment for the Humanities and the National Science Foundation are also unfilled.

The miners that Trump cares about so much will be thrilled to know there is no Federal Mine Safety and Health Review Commissioner.

It might be tempting to think that doing nothing is better than Trump’s policies, but with the apparatus that protect our national interests, natural resources, domestic priorities, and legal system grinding to a halt, it’s clear that Trump will do quite a great deal of harm even if he just continues doing nothing.