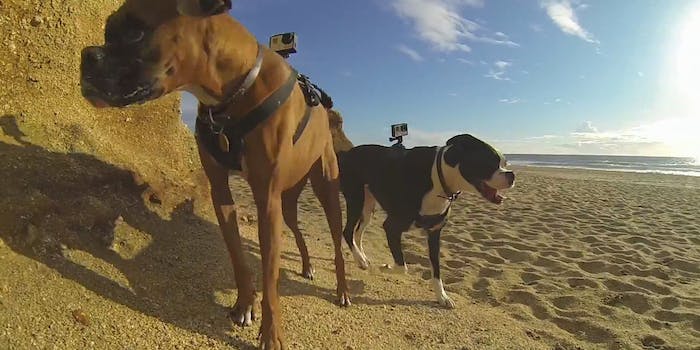 GoPro—the manufacturer of wearable/attachable/mountable video cameras whose rugged task is to capture cinematic points of view from every imaginable angle, animal, and kitchen appliance—has added man’s best friend to its list of auteurs. The new Fetch dog harness for the HERO-brand camera can be rigged to capture over-the-head shots from its back mount and wider field-of-view clips from its chest mount. The adjustable setup is suited for dogs from 15 pounds up to 120 pounds.

It didn’t take a lot of customer research for GoPro to move into the canine accessory business. The Web is loaded with consumer-generated videos in which dog owners have devised their own camera clip-on schemes to capture POV shows of Spot roaming through the woods or counter-surfing. Offering a specially designed harness will likely drive revenue for GoPo (which recently went public) but also spark some new and (hopefully) safe and interesting viral tails which can be featured on its furry friends channel and to all social media touchpoints.

Prior to this purpose-build accessory, here is how some creative canine owners captured video through their eyes of their pups.

So what’s next for GoPro? You can attach a camera inside your suitcase like George Costanza did in Seinfeld, or really think out of the box and attach your video camera to a pizza peel and capture a day in the life in front of the oven as dough becomes dinner.